I am delighted to welcome back historian John Polsom-Jenkins with a post about private domestic tutors in the seventeenth century. Tyburn‘s hero, Nick, works as a tutor in the Earl of Hereford’s household, and this part of Nick’s story was based on his research into the lives of tutors during this period, so we owe him a great deal! Here to tell you more about the subject in his own words, Dr. John Polsom-Jenkins: 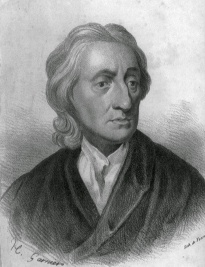 Tyburn’s hero, Nick Virtue, earns his “dashing” credentials as a highwayman, but his day job, as tutor to the frightful sons of a tight-fisted nobleman, is rather more mundane. The sexy subject of highwaymen is explored in greater depth in the works of historians such as the excellent James Sharpe. Nick’s more boring-sounding occupation is loosely based on my own research in the field of educational history. However, tutors like Nick, living and working in the households of great persons, were privy to some adventures of their own and, in some cases, could give highwaymen a run for their money in the sexiness stakes. Some famous figures, such as Thomas Hobbes, Andrew Marvell and John Locke, served as tutors in seventeenth century England.

From classical times, the sons (and less frequently, the daughters) of noble and wealthy persons, were educated at their homes by tutors who were kept within the household for that purpose. By medieval times, these household tutors might have a role in martial or religious, as well as academic, instruction and often doubled in a related role such as chaplain. It was also in the medieval period that universities developed the tutor system, where a scholar would be given particular charge over the studies and the conduct of students living at the university outside their parent’s home.

By the Tudor and Stuart periods of English history, domestic tutors were more widely utilized than ever before. In the sixteenth and seventeenth centuries, the lesser gentry (smaller landowners who were able to live off their lands rather than work for a living) and even successful merchants with aspirations for their children to move up in the world began to employ tutors in their houses. The profound religious differences which divided Europe during the Reformation also brought private tutors into demand amongst those who wanted their children educated in an unorthodox faith.

Domestic tutors were employed to teach an increasingly broad (or ‘liberal’) curriculum in everything from the basics of Latin grammar to the latest trends in natural philosophy (something akin to what we would term ‘science’) as well as to ensure their charges were well versed in the manners and behaviors that would be expected of them from a very young age. Day tutors were also brought in to provide instruction in specific gentle ‘accomplishments’ such as dancing, or speaking French.

During this period, it also became increasingly common for children destined for diplomatic office or for those from the highest echelons of society to be sent on a ‘Grand Tour’ of Europe, to see the sights, learn the languages and customs, to take lectures at foreign universities, and simply for the prestige this final gloss could give their education. These privileged children (usually males who had completed a year or so at one of the universities) were typically accompanied by a slightly older and more scholarly tutor or ‘bear ward’ on these lengthy educational voyages.

Although this could be a highly supervised and intensely educational experience, several tutors were ill-equipped to maintain control over high-born and high-spirited adolescents and some were not themselves the best examples of behavior. In 1612, the tough bricklayer-come-playwrite, Ben Johnson, was chosen to keep the young Walter Raleigh (son of the famous potato-wielding, puddle-cloaking adventurer) in check on his Tour of France and the Netherlands, but apparently it was the ‘knavishly inclined’ Raleigh who got Johnson “dead drunk, so that he knew not where he was” and then had his tutor drawn through the streets “stretched out” on a cart, telling people at every corner that Johnson “was a more lively image of the crucifix then any they had.”

The élite world of expenses-paid sightseeing tours of Italy was not the lot of most tutors, however. Only the trusted servants of the greatest lords or wealthiest merchants could hope to enjoy such perks of the job and these men were usually formidable scholars who had a strong case for being considered gentlemen in their own right. Most tutors, if the testimony of contemporary scholars is to be believed were underpaid, poorly treated clerics, waiting for a church or university job to open up for them, or for their service to lead to some greater demonstration of favor from their lord. Joseph Hall, although later to rise to become Bishop of Norwich, wrote these biting verses on the lot of such men:

A gentle squire[1] would gladly entertain
Into his house some trencher-chaplain[2]:
Some willing man that might instruct his sons,
and that would stand to good conditions.
First that he lie upon the truckle-bed[3],
While his young master lieth over his head.
Secondly, that he do, on no default,
Ever presume to sit above the salt[4].
Third, that he never change his trencher twice.
Fourth, that he use all comely courtesies:
Sit bare[5] at meals, and one half rise and wait[6].
Last, that he never his young master beat,
But he must ask his mother to define
How many jerks she would his breech should line[7].
All those observ’d, he could contented be
To give five marks, and winter livery[8].

[1] a squire – a gentleman, a landowner.
[2] a trencher was a bowl made out of bread, usually filled with stew – poor man’s fare at a lord’s table.
[3] a camp bed.
[4] salt was expensive and access to it controlled. Sitting above it became a sign of status.
[5] bare-headed, again indicative of low status.
[6] wait on the other diners.
[7] corporal punishment was generally considered essential to effective teaching and mothers were often accused of undermining teachers in this.
[8] Five Marks =3£ 6s 8d, a paltry sum of money. A livery was a coat with a badge or other design signifying the wearer’s service to a particular Lord or Lady. Attitudes to livery were complex amongst those who wore them, ranging from those who took pride in the finery and sign of favor to those who were ashamed to be seen in clothing which was selected for them and marked them out as a servant rather than as their own person.

This is not to say that there were not opportunities for ambitious tutors in more humble situations. Where some, rather like Nick, were underfed and paid only sporadically, others considered the food, drink, security, books, and opportunities to rub shoulders with the great on offer in wealthy households to be great perks of a tutoring job as well as being more than the average cleric could aspire to enjoy privately. Although meeting an influential patron offered a respectable way to move up in the World, many chaplains and tutors embarked upon the less popular route (with parents, at any rate) of marrying the daughters of their employers.

Some, like the Tudor-era music tutor, Thomas Whythorne, were rebuffed by young ladies who had been threatened with being cut off if they pursued such a relationship. Others, like the famous physician, John Harvey (he wrote a pioneering work on the circulation of blood in the human body), simply eloped with their intended (he and his Martha were able to reconcile with her father – well, he was a doctor, as was her father!). Not all were so fortunate, one Henry Hickman’s in-laws believed him to be a fortune-hunter when he married his Joanna, whereas a certain William Willmott was dismissed from Horseheath Hall for “endeavouring to pay his addresses to one of the ladies of the family”. Faint heart never won fair maiden, but the risks were high!

Spelling has been modernized. Quotations are from the Dictionary of National Biography

3 thoughts on “Private Domestic Tutors: Sitting Below the Salt in Early Modern England”