Prostitution flourished in medieval London, and in the 12th century, Southwark became the city’s official red light district by order of Henry II. His ‘Ordinances touching the gouerment of the stewhoulders in Southwarke under the direction of the Bishop of Winchester’ (1161) gave control of the Southwark brothels to the ecclesiastical authorities, which would allow the church to draw untold sums of money from them through the sale of licenses. At the time of the ordinance, there were eighteen licensed brothels in Bankside employing about a thousand prostitutes at any one time. As a result of the church taking control, most of London’s churches built during this period were largely financed by prostitution.

Why Southwark? By the 12th century, Southwark had already been a hot spot for prostitution since the Romans built the first known brothel in England at what was then an obscure military outpost. Southwark itself grew out of a brothel. More than that, Southwark had been a privileged borough for most of its history, its many churches creating a place of asylum that extended to protecting criminals and prostitutes from the full extent of the law. Southwark served as a “bastard sanctuary,” offering a kind of asylum to those rejected by society: prostitutes, criminals, lepers, and the poor lived among brothels, jails, rubbish tips, and the smellier trades, just far enough away from London that they could not be seen without a boat ride or a long walk across London Bridge. 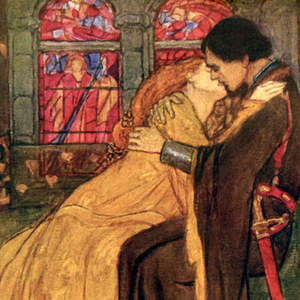 While the church officially condemned prostitution and sexual promiscuity, they had no reservations about profiting from it. St. Thomas Aquinas himself compared it to “a cesspool in the palace; take away the cesspool and the palace becomes an unclean evil-smelling place.” Southwark already smelled pretty evil; it was the perfect place for a ‘cesspool.’ Prostitution was accepted as a necessary evil, and from the end of the 12th century onward, regulated to maximize revenue for the church.

“By this act of recognition, the King and the Archbishop of Canterbury gave certain advantages to the licensed brothelkeepers or stewholders. It was much easier for them to carry on business in a protected premises in a protected area. The regulations and penalties, although set out in great detail and with seemingly terrifying (or at least terrifyingly expensive) punishments, were of little practical consequence. Most infractions would be hard to prove, and all could be nullified with a little judicious bribery.”

Brothels or “stews” had been traditionally run by bawds, but Henry’s ordinance put their management into the hands of (mostly male) brothelkeepers licensed by the church. Single women were not allowed to own brothels with exceptions being made for those who had inherited one from a relative or left one by a husband.

The ordinance was devised both to protect the women employed in the sex trade and to limit certain behaviors. One of these protections was freedom from accusations of consorting with the devil. It sounds obvious to us (and convenient for them), but at the time, witchcraft and prostitution had been almost synonymous in the public mind since King Edward the Elder linked them in the 10th century.

Prostitutes were no longer individually licensed as they had been in Roman times and did not have to wear special clothing to set themselves apart. They could not be bound to or enslaved by bawds or brothelkeepers, with limits placed on how much they were allowed to borrow from their employers at any one time (six shillings and eightpence) to prevent them from being imprisoned for debt or obliged to remain in the employ of their moneylender.

Brothels became boarding houses that rented rooms to prostitutes without board. Like the provisions preventing women from borrowing large sums of money from the brothelkeepers, this was designed to protect them from those looking to take advantage of them through inflated food prices, keeping them in poverty and confined to the precinct where they worked. Brothels were closed on holy days to encourage the women to attend services. They were refused Christian burial, but could still receive Holy Communion. 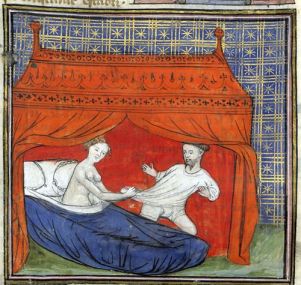 In return for these protections, prostitutes were ordered to refrain from aggressive soliciting on penalty of imprisonment. They were not allowed to grab or call out to potential customers, or curse or throw rocks at them if refused or cheated. As Burford puts it, Southwark “was a dockside area with dockside manners” and prostitutes were known not only to throw stones but chamber pots at any customers who thought to make a run for it without paying their fee.

Quarterly inspections were ordered to ensure no women were working unwillingly and to reduce the spread of venereal disease. Gonorrhea and “burning sickness” (likely chlamydia) were common and even expected; those found to be infected were fined twenty shillings and sacked. Symptoms were treated by washing in white wine, animal piss, or a mixture of vinegar and water. Many cases of gonorrhea are asymptomatic in women, so it would have been impossible to remove all infected parties, as evidenced by the epidemic of 1160.

In his Compendium Medicine (1190), physician Gilbert Anglicus described another kind of sexually transmitted disease resembling leprosy. If what he saw was syphilis, this would have been one of the earliest documented cases of it in Europe, three hundred years before Columbus is thought to have brought it back with him from the Americas.

Bizarrely, the harshest punishment was reserved for prostitutes who had lovers on the side. Men were permitted to whore out their wives and married women could sell themselves to their hearts’ delight, but any prostitute discovered to have a lover not paying for her services would be fined six shillings and eightpence, imprisoned for three weeks, and subjected to the humiliating punishment of the cucking stool – being tied to a chair and publically immersed in filth. Naturally the woman’s lover would not receive any punishment for his involvement with her; the rule would seem to have been in place to maximize profits while cutting down on her leisure activities.

Another interesting rule is that for the last customer of the day, once the woman had taken his money, she was obliged to lay with him all night. Brothelkeepers were prohibited from keeping boats and the boatmen that worked the Thames were not allowed to moor their boats on the south side of the river after dark. Once customers were in Southwark for the night, there was no leaving until morning. Burford suggests the reasoning for this is that political plotters or criminals were easier to monitor with reduced traffic on the river. Anyone needing to cross would have to go via London Bridge and they would be seen on the way.

While the Bankside brothels flourished with Henry II’s statues, Southwark’s reputation for vice was cemented when Edward I cracked down on those he deemed undesirable* a century later. He believed that these “women of evil life” attracted criminals, so prostitutes were no longer allowed within the city of London at all. Any woman found breaking this rule was subject to forty days in prison. This effectively forced any and all prostitutes well south of the river where they would stay for centuries. Although Covent Garden became something of a red light district with Harris’ List in the 18th century, the vast majority of London’s prostitutes lived south of the river through the 19th century.

* Prostitutes, Jews, the Welsh, the Scottish…how long have you got?

5 thoughts on ““A Cesspool in the Palace”: Prostitution and the Church in Medieval Southwark”