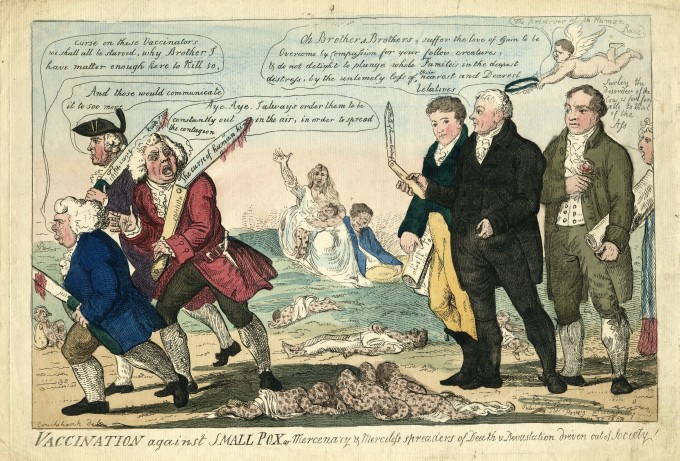 The deadly disease smallpox had been feared by man for thousands of years by the 1800s, and rightly so. It was highly contagious, incurable, and killed a third of those unlucky enough to catch it.

Those who survived it were rarely left unscathed. Aside from the inevitable permanent scarring, it could leave victims blind and doomed to spend the rest of their days battling lung or joint problems. The disease also did not discriminate between the rich or poor.

Several royals and world leaders contracted it. Queen Elizabeth I, George Washington and Joseph Stalin all had pock-marked faces which they took great pains to disguise. The 18th century fashion for wearing patches stemmed from the desire to hide the damage smallpox had done to aristocratic skin. Smallpox killed both King Louis XV of France and Queen Mary II of England, monarchs who could well afford the best physicians to try to save them, so the merest threat of it was enough to send the population into a panic.

Of course, it didn’t help matters that medical scientists had no idea how the disease was spread and had no way of treating it. The concept of bacteria and viruses would not begin to enter into medicine until 1861, so physicians were clueless. Theories abounded over time, blaming God, the alignment of the planets, and eventually evil miasmas (bad air) as the root cause of an epidemic. Treatments were equally as primitive. Prayer, smelling sweet nosegays, and bonfires were the only weapons the Western World had for centuries. As a result, outbreaks could kill thousands in a very short space of time with terrifying speed, especially children or the old. The only thing they did know, was once you had caught it, you couldn’t catch it again.

In the East where medicine was traditionally more advanced and largely unencumbered by religious interference, physicians expanded upon this idea. Using the healing scabs of a recovering smallpox victim, which they scratched into the skin of healthy people, they protected them. Although they did not realise it at the time, what they were doing was building up the body’s antibodies using a weakened dose of smallpox and thereby rendering the body resistant to any stronger. It’s still a common practice nowadays with certain diseases. Polio is a classic example. Variolation (or inoculation as we now know it) was brought to Britain in 1715 by Lady Wortley Montague, an ambassador’s wife who had suffered smallpox as a child and lost a brother to it.

Whilst inoculation did work in a great majority of cases, it was not without serious risk. By exposing people directly to smallpox, albeit a significantly weaker version of the disease, at least ten percent of those inoculated contracted full-blown smallpox in the process, often with fatal consequences. King George III lost his son Prince Frederick after he had the boy inoculated. When even the king could not guarantee its safety, a great many preferred not to take the risk. Inoculation was also very expensive, which put even more off it, so smallpox remained a devastating killer throughout the eighteenth century.

In 1784, after extensive study of smallpox victims during an epidemic in his hometown of Chester, Dr John Haygarth became convinced smallpox was transferred by human contact. He recommended quarantining anyone with smallpox and gave sound advice as to how anyone coming into contact with a victim should stop the infection spreading:

“During and after the distemper, no person, clothes, food, furniture, cat, dog, money, medicines or any other thing that is known or suspected to be bedaubed with matter, spittle, or other infectious discharges of the patient should go out of the house until they have been washed…When a patient dies of smallpox, particular care should be taken that nothing infectious be taken out of the house so as to do mischief.”

Haygarth’s methods were soon widely adopted. Wherever possible, smallpox victims were isolated away from the rest of the community. Every item of clothing and bedding used was burned to avoid contaminating others. Sometimes, this occurred using quarantine ships. These were hardly floating hospitals as there was little doctors could do other than let the disease run its course, however, moving sufferers offshore was fairly successful in containing the disease if they caught it quickly enough. 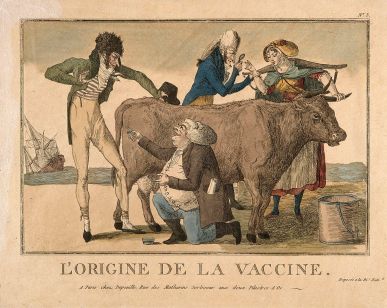 The big breakthrough came thanks to a country doctor called Edward Jenner. He decided to test the validity of an old wives’ tale which claimed all those who worked with cows were immune to smallpox. Over the course of many years, he discovered that those new to working with cattle–such as milk maids–often caught a relatively harmless disease from them. Cowpox caused a mild fever and an irritating skin rash in humans which quickly cleared up of its own accord. Jenner began to suspect cowpox was the key to the immunity from smallpox. However, to test his theory he would need to infect a human with cowpox who had never come into any contact with cows before.

In 1796 he paid the parents of James Phipps, and then injected the pus from a cowpox pustule into the boy. A few weeks later, he exposed the boy to smallpox and when nothing happened declared it a resounding success. He called his new treatment vaccination as the word vacca is Latin for cow and was convinced it was the only thing capable of defeating the ‘speckled monster’. However, the Royal Society did not welcome his research with open arms. They declared it too revolutionary and asked for more proof. It took until 1798, and several more experiments with cowpox including one on his own baby son, before they published his findings.

Although conclusive, the people were less enthusiastic to this new miracle prevention. There was an enormous backlash against Jenner’s vaccination accompanied by an extensive propaganda campaign. Aside from the fact the new prevention was more expensive than the old-fashioned inoculation, the widespread resistance came because of two things:

Firstly, and perhaps most importantly, vaccination was seen as ungodly. The very religious masses listened to the anti-vaccination sermons preached from pulpits the length and breadth of the British Isles. After all, in Corinthians is stated quite clearly: “All flesh is not the same flesh: but there is one kind of flesh of men, another flesh of beasts”. Mixing the two things was grossly unacceptable according to the scriptures. 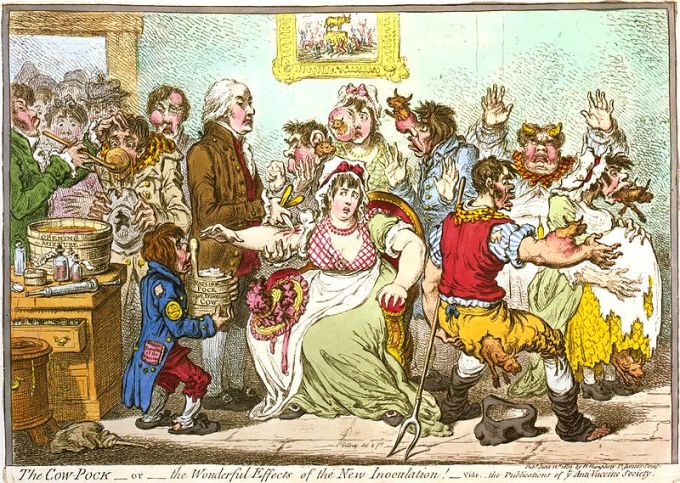 James Gillray, The Cow Pock. An anti-vaccination cartoon from 1802.

Secondly, although Jenner was able to prove vaccination did work with none of the risks caused by inoculation, he had no earthly idea why. Even the educated struggled to justify agreeing to vaccination without knowing the science behind it. Perhaps it was possible they would begin to sprout horns and udders in the future? Nobody could say for certain this wouldn’t happen.

Others were less resistant. Napoleon honoured Jenner with a medal after the Frenchman vaccinated his troops. Before that, more of his army were killed by smallpox than by battle. Another fan was President Thomas Jefferson who, in 1806, wrote a gushing letter of thanks to Edward Jenner:

“I avail myself of this occasion of rendering you a portion of the tribute of gratitude due to you from the whole human family. Medicine has never before produced any single improvement of such utility… Future nations will know by history only that the loathsome small-pox has existed and by you has been extirpated.”

While history proved Jefferson’s prediction correct, such accolades from Britain’s then enemies did not really do Edward Jenner any favours at home. Vaccination remained hugely unpopular with the masses and some dyed-in-the-wool physicians despite overwhelming evidence of its success and continued to be during Edward’s lifetime and beyond. He died in 1823 with his vaccination still as controversial then as it had been in 1796.

Things came to a bit of a head in the UK when the government stepped in. In 1840 they declared the old inoculation illegal, thus eliminating the choice. Then, the 1853 Vaccination Act made it compulsory in law for all babies to be vaccinated before they were three months old. Failure to do so resulted in a one pound fine and potentially the risk of prison. People argued they were now denied the right to decide what they could put into their own bodies and many took to the streets to protest. Compulsory vaccination was so unpopular, the government had to back down and stopped prosecuting those who refused.

It was only once the brilliant French scientist Louis Pasteur began to do more experiments on vaccination in the late 19th century, and was finally able to explain why it worked, that public objection lessened. Smallpox vaccination became widespread and the catastrophic and destructive epidemics died out. The last known recorded case of smallpox was in Somalia in 1977 and in 1980 the World Health Organization declared the disease eradicated save the few samples kept secure in laboratories. And all thanks an old wives’ tale and a tenacious, mild-mannered country doctor from Gloucestershire who never wanted to be famous.

Virginia Heath writes witty Regency romantic comedies for Harlequin Mills & Boon. The first book in her ‘Wild Warriners’ series, A Warriner to Protect Her, will be released in April 2017.

5 thoughts on “Smallpox vs Edward Jenner: How One Doctor Invented Vaccination and Cured the World”