New episode! This week, Jess talks about how Christopher Columbus brought syphilis to Europe, leading to the invention of the modern condom by a priest in the 16th century.
Tomorrow’s episode is in production, but in the meantime, how about some silliness? Which Bela Lugosi are you today?
New episode! This week, we’re looking at the problematic history of BMI, laxatives in Egypt and Ancient Rome, and the deadly diet pills of the 1930s, DNP and Pervitin (better known as meth), which was sold in chocolates as a diet supplement and went on the fuel the Third Reich.
Good morning! This is ‘Aunt Mary and her “friend” Ruth’ (1910) via @wikivictorian. This account has some great old photos, so be sure to check them out!
Episode 2 is up! This week we’re talking about Theresa Berkley, a dominatrix of #georgianlondon who opened a multistory BDSM palace and became a self-made millionaire. [Content Warnings: language and descriptions of sex] Listen and subscribe wherever you find podcasts!
Isn’t this the best photo? This is four children practicing fencing in 1930s Harlem. The photo was taken by Aaron Siskind. This immediately made me think of Joseph Bologne, the Chevalier de Saint-Georges (1745-1799). Not only was he an abolitionist, composer, and Marie Antoinette’s personal music teacher, but he was a champion fencer by the time he was only twenty.

Although the medicinal properties of the coca plant had been well known to the indigenous people of South America for thousands of years, cocaine as we know it was first isolated from the coca plant by German chemists in the 1850s. Having observed its status among indigenous people, scientists wanted to explore its uses in medicine. Among other things, the Incans had used it as a painkiller in early brain surgery. It had to be good, right?

No one was prepared for how good.

Not only did cocaine turn out to be an effective anesthetic, but it reduced bleeding by constricting blood vessels. Doctors loved it, dentists used it for toothaches and routine surgery, and Dr. Karl Koller, a friend of Sigmund Freud, confirmed its ophthalmic use when he applied it to his own eye and repeatedly stabbed it with pins. Freud himself was a champion of the drug, using it to fight his own indigestion and depression for years. He wrote a formal report praising the drug, “Uber Cocaine,” a seventy-page opus we can only assume he completed in one sitting.

While medical professionals were experimenting with it, it hit the market in Vin Mariani, a wine fortified with coca leaves developed by French chemist Angelo Mariani in 1863. “French coca wine,” as it was soon called, proved to particularly potent. The alcohol in the wine accomplished what the chemists were attempting in Germany and pulled the cocaine from the coca, so each bottle contained about a teaspoon of cocaine. It doesn’t sound like much, but it only takes about 20mg to produce a high. Each bottle contained approximately 160mg. Pope Leo XIII was so impressed that he gave Mariani a gold medal and kept a hipflask filled with it for easy access. 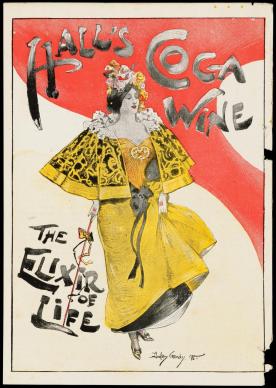 When cocaine was released to the public as a pharmaceutical, the conditions couldn’t have been better. After the Civil War (1861-65) and the Franco-Prussian War (1870-71), morphine addiction was common among veterans with chronic pain on both sides of the Atlantic. Like laudanum, another common opiate, morphine was available for purchase without prescription. Cocaine was likewise available over the counter, and doctors encouraged its use to fight morphine addiction and alcoholism.

And why wouldn’t they? It was thought to be harmless. In 1877, a doctor in the Boston Medical and Surgical Journal (now the New England Journal of Medicine) reported: “Coca…diminishes weariness, strengthens the pulse, calms nervous excitement, and increases mental activity. (…) Careful observations lead me to believe that, so far from being injurious, the moderate consumption of coca is not only wholesome, but frequently beneficial.”

Thomas Edison and Jules Verne championed it. In fiction, Sherlock Holmes used it to stave off “the dull routine of existence.” US Surgeon General Dr. William Hammond said it was harmless and particularly useful for athletes and “brain-workers,” reassuring the public that it was not addictive in the slightest.

Cocaine was touted as a miracle substance, added to every remedy for every purpose. It was sold as a powder—it was claimed it eliminated dandruff when applied to the scalp or treated allergies when inhaled through the nose. The Hay Fever Association named cocaine an official remedy. Beauty columns reported that it cured cold sores when applied to the skin. It was sold in candies or syrups to fight fatigue, toothaches, or sore throat. It came in bottles, tablets, wine, powder, cigarettes, salve, and even with syringes for easy injection. Cocaine is even thought to be one of the secret ingredients of Dr. Keeley’s legendary “Gold Cure,” a concoction administered at his addiction treatment centers throughout the end of the nineteenth century.

In Georgia, Dr. John Pemberton unwittingly turned cocaine into an enduring global phenomenon of another kind in 1886. A biochemist and Confederate Army veteran, he spent the decades following the war experimenting with painkillers and other compounds for commercial consumption. Pemberton had survived a sabre wound to the chest during the Battle of Columbus in April of 1865, but it pained him for the rest of his life, leading to a morphine addiction that would last until his death in 1888. 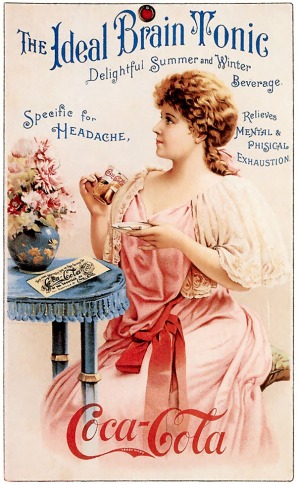 He had some success with his Pemberton’s French Wine Coca, which was marketed to veterans and “highly strung” Southern women as a recreational beverage with medicinal properties. A wine fortified with coca and kola nut, it was claimed it fought depression, morphine addiction, alcoholism, and anxiety. Pemberton created his non-alcoholic version when Fulton County enacted temperance legislation in 1886; the wine was replaced with soda water, it was sold at drug stores, and Coca-Cola was born.

The active ingredient certainly sped its success. It woke people up, helped them to work longer hours with greater focus, and it made them feel wonderful. Pemberton marketed it as a “valuable brain tonic…delicious, refreshing, pure joy, exhilarating.”

The public agreed. Coca-Cola survived Pemberton’s death, using his original recipe until the cocaine was removed in 1906.

It took several years for the long-term effects of cocaine to become apparent. Freud himself fell out of love with it in the 1890s, when he began to observe increasingly negative reactions among his own patients. He eventually gave it up himself when it began to affect his own performance, causing him to nearly kill of his own patients during a surgery.

Although cocaine was effective for short-term use for toothaches and dental surgery, its effects on the teeth overtime proved to be more than detrimental; it increased tooth decay and erosion, periodontal disease, oral lesions and infections, and loss of taste and smell.

By 1891, there were thirteen deaths attributed to cocaine, as well as countless reported addictions. Though it worked as a stimulant and painkiller, its other side effects were less appealing. Finally, it was discovered to cause delirium, breathing issues, convulsions, high blood pressure, coma, and cardiac arrest.

Cocaine was outlawed in the US with the Harrison Narcotics Act of 1914. It experienced a further surge in Germany following WWI and was used in Nazi experiments throughout WWII. It is still legal for medical use or decriminalized in many countries around the world as well as the state of Oregon.