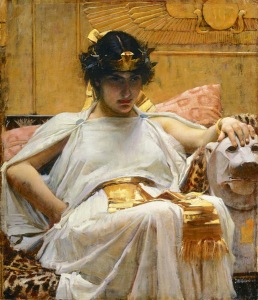 Ancient Egypt was a remarkably advanced society. They had one of the first known written languages, the earliest form of paper, a 365-day calendar, toothpaste, and breath mints. Egyptians even invented eye makeup as far back as 4000 BC by combining soot and galena to create kohl. It was worn by both men and women for status as well to protect the wearer from the evil eye.

Preferring small families, they also invented enough different methods of contraception that you’d be forgiven for wondering if someone in a TARDIS gifted them with the secrets of the universe (or at least a modern health textbook).

For those who were really serious about avoiding pregnancy, hieroglyphs from the second century CE recommend castration for either gender. Surgeries such as the ovariotomy (the removal of the ovaries) were also available, if mercifully rare.

Most people depended on much less invasive forms of contraception. One of the most common was spermicide administered in a sort of tampon made of linen and soaked in acidic oils. Some minerals found in the water also had spermicidal properties when mixed with sour milk, which had the added benefit of making the vagina more acidic to make conception less likely.

Pessaries blocking the entrance to the cervix altogether could be made from the sap of the acacia tree, another natural substance with proven spermicidal properties. The modern equivalent of this would be using a diaphragm with nonoxynol-9. For a back-up method, certain plant extracts could be eaten to alter hormonal balance and inhibit ovulation, much like the birth control pills used today.

For the more adventurous woman, a medical papyrus from 1850 BCE assures us that: “Crocodile dung mixed with honey and placed in the vagina of a woman prevents contraception…”

I can only assume that this one worked by putting all parties off of sex altogether.

Unfortunately, the Egyptians had not yet invented statistics to help us to quantify the success rate of these methods, but in the event that they failed, the recipes for herbal abortificients were passed down from generation to generation.

If all of this isn’t mind-blowing enough, the Egyptians even had the first urine-based pregnancy test. Women were told to pee on some barley and emmer every day and if they grew, she was pregnant. Amazingly enough, modern tests have actually confirmed that this was a fairly accurate way to detect pregnancy.

Sadly, this kind of pregnancy test fell into disuse and the next one was not introduced until 1929.

Condoms even existed, but they were more for show than contraception. Many have been found in the tombs of aristocrats for use in the next world. Fully prepared for one crazy party, they were entombed with sheaths made of animal skin dyed bright colors and trimmed in fur.

Also strap-ons made of mother of pearl. You know, just in case.

Men and women pictured wearing eyeliner in the tomb of Nakht, 15th Century BC.

Not only were cosmetics used in Ancient Egypt, but they were considered to be so important that they were among the few items buried with the dead for use in the afterlife. The Egyptians were remarkably advanced and along with face masks and exfoliants, they also had effective anti-aging cream made from frankincense (an anti-inflammatory) and puncture tattooing not unlike what we use today. Perhaps the most famous of Egypt’s contributions to beauty, however, is eyeliner.

Eyeliner, or “kohls,” were worn by men, women, and children of all social classes. They were black or green, and made from galena (ore of lead) or malachite (green ore of copper) mixed with oil and applied with wood or ivory. Kohls were believed to have healing properties by invoking the protection of Ra and Horus, and may have actually worked to prevent disease. Eye infections were common when the Nile flooded, but the lead-based makeup was so toxic that it killed infection before it could reach the eye. In addition to its antibacterial properties, the copper ions in the malachite protected the eyes from sunburn.

Although eyeliner was very common, today we probably most associate this iconic style with Cleopatra, a woman of such legendary sex appeal she is still very much a presence in popular culture today. Plutarch tells us that she was not exactly a beauty, but her presence and charm made her irresistible. Goodness knows it would take both to win over both Julius Caesar and Mark Antony and pass yourself off as the reincarnation of the goddess Isis. She had mad language skills (speaking at least nine languages), a signature scent (henna oil), and wicked awesome eyeliner.

This Halloween, why not have a little fun with history and make some Egyptian eyeliner? Whether you’re rolling yourself in a carpet to seduce a foreign dignitary or just passing out candy to trick-or-treaters, give yourself a little ancient world smolder with this modernized recipe developed from Sally Pointer’s in her magnificent The Artifice of Beauty.

Fortunately for us, this recipe does not include lead or anything known to be toxic. Before applying anything to your face, please do a patch test on your arm in case you are sensitive to any of the ingredients. You don’t want to mess around with your eyes! 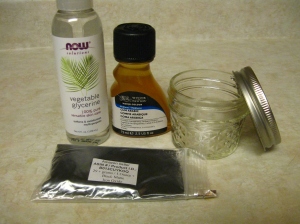 Mix the gum arabic and glycerin into the iron oxide powder, then add water a drop at a time until the mixture turns into a smooth, thick paste. You can apply it immediately or allow it to set.

*Pointer’s recipe uses ½ teaspoon of powdered gum arabic, but I could not find this so I substituted the liquid version. 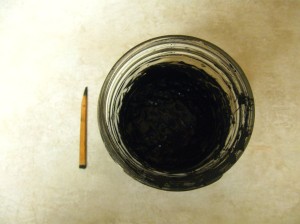 The Egyptians applied this with ivory or wood, so I used a toothpick (pictured) because I’m difficult. You will probably get better results using an eyeliner brush. I used the toothpick to stipple the liner all around my eyes, and extended the line with the wider end of the pick. This liner is as easy to rub off as put on, so it’s more effective to build it up slowly, allowing it to dry as you go. It dries quickly and the color is very dark. It wears surprisingly well, but will flake easily if you rub it. Mercifully, it is very water-soluble and will come off will come off with soap and water. 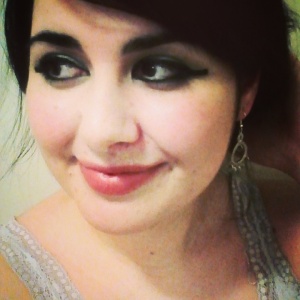 In addition to the eyeliner, I am also wearing a dark green eye shadow the color of malachite (pictured right). Although depictions of Cleopatra often show her wearing a bright, peacock blue color on her eyes, malachite is actually a vibrant emerald green.

I ordered the iron oxide for this recipe off of Amazon, thinking I could find the other ingredients easily enough around town. Unfortunately, gum arabic is not that easy to track down. After trying several stores, I found some liquid gum arabic in the watercolor paint section of Michael’s. I used vegetable glycerin I found in the skin care section of Whole Foods. All of the ingredients can be found easily online if you have time to order them.

If you don’t happen to have the ingredients lying around, this project might be on the expensive side. The iron oxide was about $13 with shipping, the gum arabic $17, and the glycerin $7. For $40, you could walk into Sephora and buy pretty much any eyeliner(s) you’d like that would deliver similar results and last longer. This is not very cost-effective, but if you want to know what it’s like to fix your own kohl paste and how it feels drying on your face (for research or just curiosity), it’s a fun way to spend an afternoon.

Lucas, A. Cosmetics, Perfume, and Incense in Ancient Egypt.

Pointer, Sally, The Artifice of Beauty.