Between 303 and 311CE, the Roman Emperors Diocletian and Galerius masterminded the last Great Persecution, a final attempt to exterminate Christianity altogether. It failed. By 322, Christianity had successfully transitioned, thanks to the conversion of Constantine, from being a hunted sect to becoming the undisputed state religion of the Roman Empire. The dizzying speed of this change, of Christians moving from being hunted down and burned at the stake to being installed in the corridors of power, had a vast effect on the history of the Catholic Church, the history of Europe, and on the imagination of countless people.

As a persecuted people, Christians had developed a mythology where the martyr was the ultimate heroic figure. But now it was easy to be a Christian, and no more martyrs were appearing. In the Middle East, particularly, where Christians had always been persecuted the hardest, Christian hardliners began to isolate themselves in the wilds as the first Christian hermits, monks and nuns. A literature began to spring up around them.

The Lives of the Fathers (Vitae Patrum) was collected in 1602 by Heribert Rosweyde, but it compiles texts written between the fourth and seventh centuries about these lonely desert saints. Book One ends with the biographies of eleven women. Four of these Latin stories, the lives of Saints Thaïs, Mary, Pelagia and Mary of Egypt, have the suffix meretrix.

It means whore. The word gets translated in Latin dictionaries as “prostitute” or “harlot” or “courtesan” even, but in Latin it is a swear word. It’s a slur. Men throw it at women from the classical period on. For example, in 54 BCE it was one of the slurs addressed to the Roman socialite Clodia by the lawyer Cicero in his speech Pro Caelio – he used it nine times, but then Pro Caelio is the quintessential text of Latin misogyny. Meretrix has that exact force that the more polite translations of words like it just don’t. It is an insult. It is a blot on the language. And part of the business of translation is to translate things with their appropriate force.

But what does it even mean? What did they do to cause the label to be applied to them, even after they were saints, so that through posterity, in the Catholic and Orthodox calendars, they would continue to receive the name: whore, meant as an insult?

The story of Thaïs appears to have been written at some time in the fifth century, but is set in 350s, since it features Paphnutius, a real figure active between the 320s and the 350s. Paphnutius visits Thaïs, reputedly the most beautiful of Alexandria’s courtesans, and pretends to buy her for sex. He browbeats her into repenting and publicly humiliating herself; he takes her to a convent where he seals her in a cell with her own effluent and orders her to pray a simple mantra of repentance; three years later he comes back and lets her out.

He tore down the threshold that blocked her in, but she insisted that she remain

imprisoned there, even though the door was open.“Come out!” he said. “God has forgiven your sins!”“I bear witness to God,” she said, “because of whom I am in here, that all of my sins appear to me as if on a tray before my eyes, and I can’t stop seeing them.”“It wasn’t your punishment that removed your sins,” Paphnutius cried, ” but the fact that you always have the guilt of them in your mind.”

– Anon, The Life of Saint Thaïs the Whore. 3

He lets her out and she refuses, until he tells her she has been saved by her own self-loathing, and then she comes out, and, broken, she dies shortly afterwards.   It’s only a page long. I close my eyes and I see Thaïs kneeling in her own piss and shit, blank-eyed, head-lolling, starved, only kept alive by the mantra she is forced to repeat to such an extent that when the ritual is broken, she dies in two weeks. It’s a legitimate horror.  While (although she’s still on the calendar, 8th October) authorities think she’s fictional, of all the stories in the Lives of the Fathers, this is the one that could happen, and the one that most captured future imaginations. Anatole France’s novel Thaïs approaches the story critically and was adapted for stage and film. Michele Roberts’s account of her in her novel Impossible Saints is as bleak and brutal as the source material.

The story of Mary dates to about 370. Mary is the niece of a hermit called Abraham, orphaned, who lives with him in his little house in the desert. Mary is pestered into having sex with a nameless monk and is so consumed by guilt at having sex once that she thinks she might as well just go and do it for money, so she runs away and goes to work in a brothel. Abraham goes to get her back and they tearfully reconcile; he forgives her for everything. Saint Mary is also remembered on October 8th.

The account of Pelagia comes from the fifth century, but is again set in the fourth. A bishop sees an actor pass in the street.

As all of us were admiring his holy teaching, look, all of a sudden the most famous actress of Antioch passed us by, the best of the ballerinas and comediennes. She was riding on a donkey, and she was dressed so ostentatiously that you couldn’t see anything of her beneath all the gold and gems and pearls. Even her feet were covered in gold and pearls. She had a train of boy and girl slaves with her, all dressed in expensive clothes, each with a golden collar, some in front and some behind. No one could ever have enough of her loveliness. She passed by us, and the air was filled with musk, and some of the sweetest fragrances in the whole world.

–Jacob the Deacon, The Life of Saint Pelagia the Whore, 2

She is specifically what the Romans called a mima. Now in ancient theatre of the respectable kind, the comedies and tragedies, all the actors were men. Female actors did the mimes, the sacred fertility shows, and these were bawdy, and had nudity, and included simulated sex acts. Writers of antiquity tell us that these shows included actual sex acts, and that the women who performed in these shows were sex workers too, but we don’t know if that’s true. This story assumes that being an actor makes her a stripper and a porn star too. The title, added later, just labels her a whore and is done with it.

The actor, Pelagia, converts to Christianity; Satan visit her and tries to get her to recant.

He said, “Why are you doing this to me, Lady Pelagia? Why are you playing the part of my personal Judas?”

– Life of Saint Pelagia the Whore, 9

She refuses, and runs away in one of the bishop’s cloaks. Three years later, the narrator asks to go on a pilgrimage to Jerusalem. Nonnus asks James to send his regards to a hermit who lives nearby called Pelagius.

I found the hermit on the Mount of Olives, where Jesus had prayed, in a modest little shack, closed off on all sides, except for a little window in the wall. I banged on the shutter of the little window, and she opened it and at once recognised me, but I didn’t recognise her. How could I have possibly recognised her since when I saw her before she was indescribably beautiful, and now her face had wasted away from her starving herself? Her eyes looked like ditches in her face.

–Life of Saint Pelagia the Whore, 14

It is of course Pelagia. Shortly after she dies. When it’s discovered that the miracle-worker was in fact a young woman, the assembled people marvel, and the moral is that she’s saved because she became a man. Her day, again, is October 8th.

Mary of Egypt’s story, written by Sophronius, probably in the 630s but is again set some time in the late fifth century. Zosimas of Palestine, supposedly the world’s best monk, meets a naked old woman in the desert, who, although reluctant initially to speak, tells her story.

Her skin was completely black, all tanned by the heat of the sun, and the hair on her head was white like the clouds, and short, and like wool. And it fell no farther than the nape of her neck.

-Sophronius, Life of Saint Mary of Egypt the Whore, 7 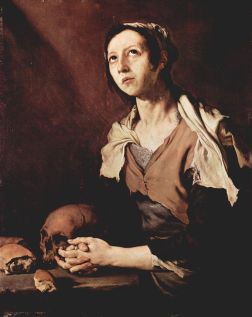 She says she’s from Egypt. She was promiscuous from a young age. That’s it. She slept with anyone who asked.

I took nothing from anyone for it; now that I was mad with passion… I fulfilled my sexual needs for free. I was evil! And don’t think I took nothing because I was rich – no, I lived by begging, and sometimes working as a weaver.

-Life of Saint Mary of Egypt the Whore, 13

So in fact, she was explicitly not a sex worker. She just liked sex.

She one day decided, she says, to go on a pilgrimage to Jerusalem, and worked her way across by sleeping with all the men on the boat. At Jerusalem, she found herself barred from the temple by an invisible wall. She prayed for forgiveness and a vision of the Virgin Mary told her to go to the desert. She bought three loaves of bread and retreated into the desert. The bread miraculously kept her going for fifteen years.

Illiterate, she now knows the Bible by heart. She levitates, walks across rivers. Zosimas visits her a couple more times and on the second time finds her dead. An angelic lion appears and writes her name on the ground: Mary of Egypt. The lion buries her.

The Orthodox church in particular honours Mary of Egypt in the week before Easter. They say the moral of her story is that even the greatest of sinners can become miracle workers.

But what was her sin, exactly? She liked sex. She slept around. In the society I live in, it is no big deal. But back then, that made her the worst. It earned her the label, whore.

And in all of these stories, all of which are supposed to be about redemption, the slur sticks in the title (and I don’t think it’s an accident that the three of them share a feast day). In the same way that Ebenezer Scrooge isn’t remembered as a byword for the redemptive power of Christmas, these four women get “whore” attached on the top line of the permanent record. It never goes away.

Howard David Ingham is a writer, poet and artist. He has an MPhil in Late Latin Literature and once got hired by the British Government to do something secret. He writes regularly at Chariot. His book, The Age of Miracles is still funding on Kickstarter.