Marriage is a contract. In terms of religion, a couple that marries enters into the default contract defined by their faith. When two people agree to marriage in the absence of a written contract, they also accept the default contract provided by the state and its laws.

The state’s contract is essentially economic, despite the romantic glow in which modern culture dresses marriage. Anyone who does genealogical research quickly realizes that the recording of marriage followed closely on the recording of deeds and wills, which are among the earliest recorded personal contracts. Other records—birth, death, even divorce—came much later. Marriage and property are deeply enmeshed in law, impacting inheritance and ownership. In our modern era, other economic factors impacted by marriage laws include tax breaks, benefits, and entitlements.

These laws and customs have not always been kind to women. Not long ago, English Common Law, under the doctrine of coverture, held that a married couple was one person under the law. That person, of course was the husband. A woman gave up all legal right—even the right to her own children—when she married. In that arrangement, it isn’t difficult to understand the need for marriage settlements, particularly among the property classes. A contract designed to assure a woman and her children would have some financial means of support in the event of widowhood provided at least some protection where the law didn’t.

In our own day, pre-nuptial agreements spell out property rights, particularly among the super wealthy in a similar manner. Couples also may establish contracts that spell out everything from the division of labor to the custody of pets.

Long before any of that, the Jewish marriage contract, or ketubah, provided all married women with the security of certain financial arrangements. The earliest know example of a ketubah dates to 440 BC. Because such documents were legal rather than religious, they were written in Aramaic rather than Hebrew, and this one is no exception. It outlines settlements paid to the bride’s father and the amount both families contributed to the dowry. It explicitly names the wife as the beneficiary in the case of the husband’s death.

At no time in history has the ketubah had anything to do with purchasing a bride. In Judaic law husbands did not have property rights over their wives. The ketubah is a “charter of women’s rights in marriage and men’s duties.” A ketubah is not, actually, a contract between husband and wife. It is traditionally a document in which witnesses verify the groom has met his obligations and may marry, and that the bride has freely accepted his proposal. The witnesses testify that the groom will meet all human and financial obligations, “as Jewish husbands are wont to do.”

The elements in a traditional ketubah are:

The promise of the woman’s conjugal rights is interesting because of the contrast to other religious traditions. In Jewish tradition marriage is holy, and not entirely, or even primarily, intended for procreation. The Torah Genesis 2:18 states “it is not good for man to be alone,” indicating companionship as the goal of marriage. Refraining from marriage is frowned upon in the Jewish tradition. 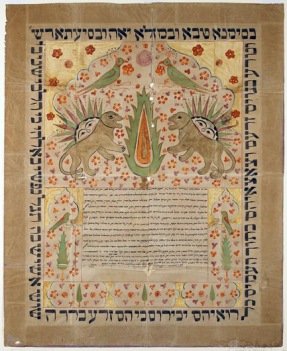 In “An Open Heart,” my contribution to the Bluestocking Belles’ 2016 holiday anthology, Holly and Hopeful Hearts, Adam proposes to Esther privately first to make sure she is willing. She accepts his proposal publicly when it is put to her by a matchmaker, but begins to question the elements of the ketubah. To the horror of the matchmaker and her elders, she and Adam agree to add clauses about the education of their daughters. Esther demands that they receive equal opportunity for at least Judaic learning within the family, while the two of them continue to support women’s education more broadly.

Now couples routinely modify the traditional text to reflect their beliefs going much farther than Esther and Adam. One site lists texts for Orthodox, Conservative, Reform, Interfaith, Same Sex, Secular Humanist, and Sephardic marriages as well as a “write your own” option. Couples generally sign the ketubah shortly before the wedding, as do two witnesses. The document becomes a family treasure, often a work of art in fine calligraphy that is framed and hung in the home.

Caroline Warfield grew up in a peripatetic army family and had a varied career (largely centered on libraries and technology) before retiring to the urban wilds of Eastern Pennsylvania. She is ever a traveler and adventurer, enamored of owls, books, history, and beautiful gardens (but not the act of gardening). She is married to a prince among men.

Ketubah.com: The Origins of the Ketubah.