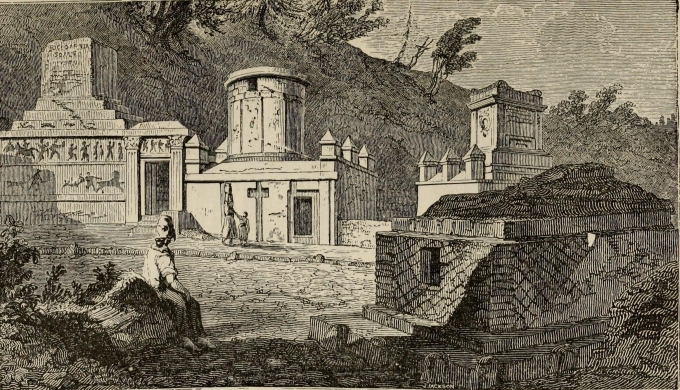 Street of Tombs, Pompeii. From the Handbook of Archaeology by H. Westropp (1867)

By the first century AD, there were more than 32,000 sex workers registered in the city of Rome. There were likely just as many who were unregistered in the city, and countless more worked throughout the empire. To get an idea of their popularity, you only have to look at how many words they had for the profession. Meretrices were regulated and paid taxes, prostibulae were free agents, ambulatae walked the street, delicatae were high-class courtesans, and famosae were daughters of the patrician families who did it more for fun than anything else. Most operated within the cities, but a select few worked just outside.

The bustuariae worked out of cemeteries, catering to mourners and those with darker desires. By day, they were professional mourners and were known to write their services and prices on the tombstones in chalk. They would meet their clients at the cemeteries again at night, sneaking into mausoleums or using the graves as beds. Also known as noctilucae (night moths*), they cultivated a certain look. Known for pale skin and severe expressions, they themselves appeared to be dead.

As it so happens, that was part of the appeal. Some widowers sought them out, working out their grief through sex. Others paid the bustuariae extra to pretend to be dead. Questionable kinks aside, working in cemeteries may have been as practical as fanciful. The women knew the cemeteries better than anyone and could entertain in any number of concealed locations, and they were guaranteed a steady stream of new clients.

Mentioned with a certain degree of derision by Martial, Juvenal, and even Catullus, bustuariae were considered to be among the lowest of the sex workers, and some seem to have lived in the cemeteries as well. While there are legends of ghoulish bustuariae (such as Nuctina, a woman who apparently slept with coins over her eyes in a grave with her name on it), they appear to be just that–legends. Nevertheless, the trade thrived. Bustuariae could be found throughout the empire as far as Roman Londinium to the north, but their true legacy extended further still. 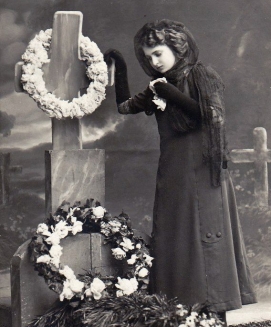 The connection between sex and death endured long after Rome fell, and the bustuariae survived as well. Writing in the 1880s, Guy de Maupassant describes an encounter with one in Montmartre Cemetery in his short story, Graveyard Sirens**. Montmartre, of course, is the exact place you’d expect to find one. (See also Ghouls’ Night Out: Sex, Death, and Damnation in Fin de Siècle Paris)

Encountering a beautiful young woman in deep mourning with a ghostly pallor, the hero begins an affair with her after he goes to visit his late mistress’s grave. Even after he ends it, he remains obsessed with the unnamed woman:

“I did not forget her. The recollection of her haunted me like a mystery, like a psychological problem, one of those inexplicable questions whose solution baffles us.”

Finding her a month later with another man in mourning in the same cemetery, the hero asks himself:

“To what race of beings belonged this huntress of the tombs? Was she just a common girl, one who went to seek among the tombs for men who were in sorrow, haunted by the recollection of some woman, a wife or a sweetheart, and still troubled by the memory of vanished caresses? Was she unique? Are there many such? Is it a profession? Do they parade the cemetery as they parade the street? Or else was she only impressed with the admirable, profoundly philosophical idea of exploiting love recollections, which are revived in these funereal places?”

*Noctilucae. Now defined as any creature that shines in the dark.