Some people think medieval history is boring—all religion, suppression, and marrying for alliances—but we know better, don’t we? Medieval history is a Pandora’s box of surprises, and the deeper you go, the stranger they get. Case in point, penitentials. Yes, I’m going to get into sources here with you for a minute, but bear with me, it’s worth it.

When studying the Middle Ages, the temptation is to stop at Canon Law, that is, the rules and guidelines set by the Church. The mistake is in assuming everyone lived by it; even prominent people within the Church disagreed with each other on many key points, and the laws they reached by consensus were laws for an ideal world where everyone lived perfect Christian lives according to the standard of whichever pope they happened to have at the time. As you can imagine, not everyone lived the way Rome wanted them to. To get a more accurate picture of medieval life, we need to consider other sources like court documents, medical texts, and even popular literature. The source we’re going to be looking at today is a personal favorite of mine: pentitentials.

When I get busy with dragons, I never forget my crown

What, pray tell, is a penitential? It’s every bit as exciting as it sounds. Penitentials were confessional literature compiled by monks as guides to the theory and application of confession. Spanning hundreds of pages and multiple volumes, penitentials listed every sin imaginable in separate categories and advised punishments for each. Penitentials are fantastic sources for those studying the Middle Ages, but proceed with caution: while many of the sins do give us a better idea of the ways in which common people could misbehave, it is impossible to say how often some of the sins came up (or how many were products of a bored monk’s imagination. See also marginalia, below).

With that disclaimer firmly in place, we are going to take a look at the Decretum of Burchard of Worms.

Apart from having the best name ever, Burchard served as the bishop of Worms from 1000 until his death in 1025. During his tenure, he wrote his Decretum, a massive twenty-book list of every sin conceivable to the medieval imagination, drawing on a combination of earlier penitentials and things actually heard in confession at that time. Some of the penitentials he used as sources dated back to the seventh century, and this may help to explain some of the stranger sins below.

A wolf dressed as a monk. Why not?

The nineteenth book of Burchard’s Decretum has a section dealing in sickness of the soul, including magic, divination, and “women’s vices.” It is worth noting that many of the “diabolical practices” mentioned here could be forgiven with a fairly light penance, as opposed to the death sentences handed out like candy four hundred years later with the publication of the Malleus Maleficarum. Many of these are framed as questions a priest would ask his penitent. I have included some of my favorites here, but if you want to read this in its entirety, you can also find it here.

As relevant art from these period is sadly limited, I have added some marginalia to our…erm…margins. Enjoy.

“Have you violated a grave, by which I mean, after you see someone buried have you gone at night, broken open the grave, and taken his clothes? If you have, you should do penance for two years on the appointed fast days.”

I mean, not since college. Is that bad?

“Have you refused to attend mass or prayers or to make an offering to a married priest, by which I mean have you not wished to confess your sins to him or receive the Body and Blood of the Lord from him because you thought he was a sinner? If you have done so, you should do penance for one year on the appointed fast days.”

That’s right. Married priest. At this point, priests were still allowed to marry or have concubines. Clerical marriage wasn’t condemned by the pope until Leo IX in 1049, but the ban didn’t take hold until well into the twelfth century after the Lateran councils in 1123 and 1139. The more you know!

“Have you tasted your husband’s semen in order to make his love for you burn greater through your diabolical deeds? If you have, you should do seven years of penance on the appointed fast days.”

Okay, oral sex has magical properties. So far, so sensible. What next?

“Have you done what some women are wont to do? They take their menstrual blood, mix it into food or drink, and give it to their men to eat or drink to make them love them more. If you have done this, you should do five years of penance on the appointed fast days.”

How’s that for a binding spell? If that doesn’t work:

“Have you done what some women are wont to do? They take a live fish and put it in their vagina, keeping it there for a while until it is dead. Then they cook or roast it and give it to their husbands to eat, doing this in order to make men be more ardent in their love for them. If you have, you should do two years of penance on the appointed fast days.”

“Have you done what some women are accustomed to do? They lie face down on the ground, uncover their buttocks, and tell someone to make bread on their naked buttocks. When they have cooked it, they give it to their husbands to eat. They do this to make them more ardent in their love for them. If you have, you should do two years of penance on the appointed fast days.”

“Have you done what some women are wont to do? They take a man’s skull, burn it, and give it to their husbands to drink for health. If you have, you should do one year of penance on the appointed fast days.” 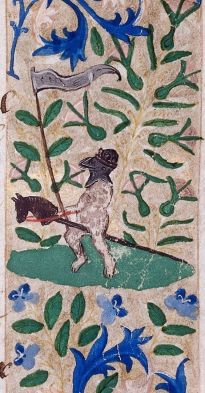 See what happens when you don’t have your burnt skull potion?

“Have you believed what many women turning back to Satan believe and assert to be true: you believe that in the stillness of a quiet night, with you gathered in your bed with your husband lying at your bosom, you are physically able to pass through closed doors and can travel across the span of the earth with others deceived by a similar error? And that you can kill baptized people redeemed by Christ’s blood without using visible weapons and then, after cooking their flesh, can eat it, and put straw, wood, or something like this in place of their hearts, and, though you have eaten them, you can bring them back to life and grant them a stay during which they can live? If you have believed this, you should do penance for forty days (that is, a quarantine) on bread and water with seven years of penance subsequently.”

Do any women believe that? Show of hands, please.

“Have you done what some adulterous women do? As soon as they find out that their lovers wish to take lawful wives, then they use some sort of evil art to extinguish the men’s sexual desire so that they are useless to their wives and unable to have intercourse with them. If you have done this or taught others to, you should do penance for ten days on bread and water.”

Sure. Someone put a “spell” on you. Right.

“Have you done what some women are accustomed to do? They take off their clothes and smear honey all over their naked body. With the honey on their body they roll themselves back and forth over wheat on a sheet spread on the ground. They carefully collect all the grains of wheat sticking to their moist body, put them in a mill, turn the mill in the opposite direction of the sun, grind the wheat into flour, and bake bread from it. Then they serve it to their husbands to eat, who then grow weak and die. If you have, you should do penance for forty days on bread and water.”

Is this a sin or a recipe? And hang on, only forty days for murdering a spouse with magic bread?

Also included under “women’s vices”, for some reason:

“Have you eaten any food from Jews or from other pagans which they prepared for you? If you have, you should do penance for ten days on bread and water.”

BURCHARD. What. The. Heck? I guess there wasn’t a chapter for xenophobic culinary guidelines.

As batty as these sound, some of them are nevertheless revealing of superstitions and pagan rituals that had survived until the eleventh century through confessional literature, if not in real life. We do need to take these with a pinch of salt, however; while some of them could be indicative of real practice, others are just as likely to have been imagined or embellished by the monks painstakingly copying these manuscripts and doodling madness in the margins.

You can find this section translated here.