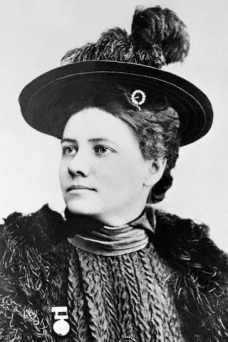 When Nellie Bly died in 1922, at least one obituary described her as “the best reporter in America.” She was certainly an impressive investigative journalist. As an advocacy journalist, she wasn’t shy about putting her opinions in her stories, and she could even be seen as a precursor for the later New Journalism, where the writer is part of the story.

She also was a feminist pioneer, and ran her husband’s iron works company after his death, patenting or co-patenting a better metal oil drum. She was a celebrity in her own right. Her name appeared in the headlines of many of her stories, and board games and playing cards were designed with her image. She was a phenomenon.

Bly is best remembered for her 1887 career-making series Ten Days in a Mad-house and for besting Verne’s hero Phileas Fogg’s time—and that of a rival journalist—by traveling around the world in seventy-two days in 1889. Both are still readily available online and in book form.

The Keeley Institute and the Gold Cure

Bly’s articles about the treatment of madness were written in New York near the start of her career. Near the end, Bly investigated a so-called “alcoholism cure” for the well-to-do in White Plains. In a way, this lesser-known chapter is a thematic bookend to her life as a reporter. 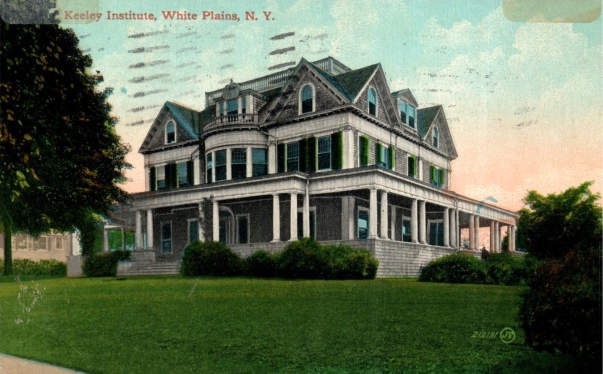 While Mad-house dealt with life-and-death issues—the need for mental illness treatment reform among the mostly poor, foreign-born women on Blackwell’s Island—her 1894 story Nellie Bly Takes the Keeley Cure was less serious and ran in a single installment. It was as concerned with Bly’s preparations to pass herself off as a high-functioning absinthe drinker as the cure itself. It exposed The Keeley Institute, a fraudulent alcoholism cure clinic. While the mental asylum was making people worse, Keeley’s clinic may have been helping alcoholics, even though its “cure” was hokum.

Founded by Leslie Keeley in 1879 in Illinois and expanding to branches throughout the United States and Europe, the Keeley Institute’s slogan was “Drunkenness is a disease and I can cure it.” It also claimed to work for “opium inebriates” and “morphine fiends.” They treated people with Keeley’s proprietary “gold cure” for alcoholism, not available anywhere else. 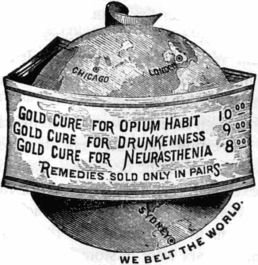 The gold cure was a potion that included something Keeley called “double chloride of gold.” Independent analyses found that the gold cure was a witches’ brew of varying ingredients—gold salts, alcohol, morphine, cannabis, and other substances—in colored water.

Despite the toxic and/or addictive nature of many of these ingredients—and remember, morphine was then legal and even heroin was sold over the counter in the United States until 1924—there were few if any claims of negative side effects or new addictions associated with the cure other than vomiting or dizziness.*

It was snake oil, but enough people reported that it worked—Keeley claimed a 95% success rate—that Bly’s antennae were out. Her stepfather had been an alcoholic, and she didn’t believe in easy cures. The cost was a hundred dollars paid in advance. Bly managed to negotiate a one-week stay for twenty-five, though she was told that was normally not allowed.

The cure was administered by syringe four times a day for four weeks, with tonics given at two-hour intervals. Bly rightly noted with horror that the male patients were all injected with the same needle, which was not cleaned between injections. Female patients, of which there were few at the time of Bly’s visit, were administered privately in their rooms. 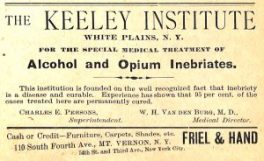 Each patient was also given a bottle of whiskey by the institute so they could taper off their drinking on their own. Bly said she “gave it to an expert, who pronounced it the worst rot-gut he had ever tasted.” As a purported absinthe drinker, Bly had to buy her own bottle from a local shop.

Some of the staff had taken the cure themselves. Bly noted approvingly that the attending medic Dr. Millspaugh had a red nose, assuming it revealed a past love of drink.

Later, when he told her he was not and never had been a drinker, Bly wrote, “How can a doctor who doesn’t know the symptoms of drink doctor one for the complaint?”

Bly was less impressed when she discovered that rather than one-and-done, some patients had taken the cure multiple times. The wife of one patient said she had no faith in the cure lasting, though her husband had stopped drinking after a week:

Still, she told Bly, “So long as my husband believes it is all I ask. If he can be cured for even a few months, it is well worth the expense and time.” Their doctors had warned that he would be dead in a month if nothing was done.

Mr. J.J. Brown, the manager, explained to Bly why patients sometimes came back. “It puts people back where they were before they began to drink, (but) there must be a desire on the part of the patient not to drink. We can’t make it impossible to drink if they feel so inclined.”

Bly was unconvinced. She wrote: “I would not for the world cast discredit upon anything that would turn people from drink for even four weeks. But it is my honest opinion that the cure is no cure in itself.”

She declared that being “away from temptation, (with) plain, wholesome food, pure, bracing air (and) plenty of rest” make the patient “feel better. He credits it to the cure, and his faith grows stronger . . . He believes he is cured. That is the great thing. So long as he believes that and does not taste, he is all right, but woe to the Keeley patient who tries a drink!” 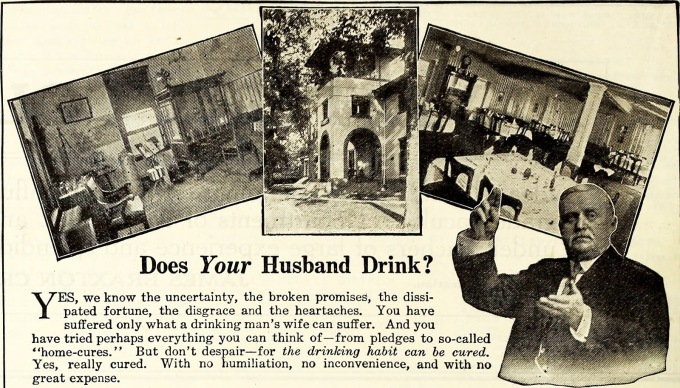 Advertisement for the Keeley Institute in Greensboro, NC (Blandwood Mansion)

Bly was mostly correct in her analysis, but she was missing one thing. The reason the Keeley Institute worked as well as it apparently did was that it wasn’t just a vehicle to sell snake oil—though it undoubtedly was that—but it offered something else: dignity. The alcoholic was treated not as a lowlife, weak, or evil, but as someone with a disease.

In Slaying the Dragon: The History of Addiction Treatment and Recovery in America, William L. White explains: “The atmosphere was informal and friendly at the clinics, with a marked absence of the bars and restraints that were typical in most inebriate asylums of the period.” Also dissimilar to later programs such as Alcoholics Anonymous, Keeley didn’t include religion as a component. The institute didn’t include addiction counselors, though most of the doctors were former alcoholics themselves. According to White, “There were enough doctors on staff to go around.”

Apart from the dubious gold cure, modern addiction treatment does follow many of Keeley’s tenets, including the way alcoholism is viewed. The US Surgeon General’s 2016 Report on Alcohol, Drugs, and Health clearly states that “Addiction to alcohol or drugs is a chronic but treatable brain disease that requires medical intervention, not moral judgment.”

The institute promoted “mutual sharing and alternative diversions” as part of the therapy, much like the peer support groups recommended today. Bly credited much of the institute’s success to the healthy food, exercise, and fresh air, and these are often components of modern addiction rehab treatment too. It is now recognized that relapse is not uncommon among addicts, and that rehabilitation rarely works unless the patients want to get better. 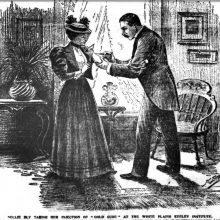 What makes the Keeley story an almost perfect bookend to Bly’s career is that alcohol and drug addiction often co-occur with mental health issues. They are related problems, also known as dual diagnoses—alcohol or drugs may be used to self-medicate for a mental health problem, or drug and alcohol use may exacerbate mental health problems.

Keeley was a conman, but he seems to have helped others in spite of himself, inadvertently using his bogus “cure” as a spoonful of sugar to help the real medicine go down. Call addicts irredeemable, and they’ll stay away. Pretend you have a cure, then distract them with healthy food and exercise, and maybe they will get better.

Nellie Bly knew that Keeley promised more than he could deliver and acted accordingly. A claim of a 95% success rate is crazy, and maybe that put her on her mettle. A better story would have been to find out how many people the Keeley Institute actually helped and why, or to compare its success rate to more traditional inebriate asylums.

Nellie Bly threw herself into her stories, tilted at windmills, slew dragons, suffered defeats, and left behind a record of achievement of which anyone would be proud.

*There have been some vague and undocumented claims of deaths, but if there were actual deaths, it’s hard to imagine Bly or other journalists ignoring them or making light of the Keeley cure thereafter.