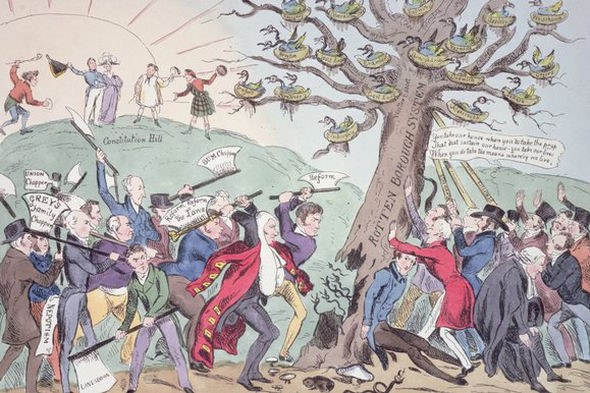 As a lover and writer of Regency romances, it is easy to get swept away with Jane Austen’s view of that world, where ladies and gentlemen lived in grand houses, attended balls and the most challenging thing that they encountered in their day to day lives was how to behave politely to one another. Unfortunately, for the majority of British people in the early 19th century, daily life was a constant struggle and they were becoming increasingly upset about their lot in life. Governing these people became extremely difficult, which meant that successive British governments genuinely did fear revolution. And they were right to.

The beginnings of the Radical movement happened at the end of the 18th century. Encouraged by the American and French revolutions, as well as influential writers like Thomas Paine, the working classes began to challenge the old order. After all, Britain was becoming ‘Great’ on the backs of their work. The Industrial Revolution meant that the ruling class were quite dependent on these underlings to provide the labour in the factories and mines that sprang up all over the country. However, they were paid a pittance to do it, worked ridiculously long hours and lived in the most horrendous conditions imaginable. While they were suffering, the rich got richer and wielded all of the power.

Only men with a significant amount of land could vote. As a result, until 1832, less than 5% of the total population could vote and most of the new industrial towns and cities, such as Manchester, did not even have an MP to represent the tens of thousands who lived there. Worse still, the landed classes used foul means to ensure that their voice was heard above all others by manipulating the electoral system. So called ‘Rotten Boroughs’, like Dunwich in Suffolk, sent two MPs to Parliament when their total population, including horses and livestock, would probably not fill all the pews in their local church. In fact, more often than not, even having an MP was not particularly beneficial. They were nearly always the puppet of the wealthy landowners who had voted for them and even if they did step out of line, the unelected House of Lords could overrule any law passed in the House of Commons.

In The Rights of Man, Thomas Paine put forward a revolutionary idea that many found shocking–that the aristocracy did not have any ‘hereditary wisdom’, as had always been believed, and therefore did not have the automatic right to govern everyone else. Paine went further by suggesting that democracy was the way forward, that all men should have the vote, taxation should be lower for the poor than it was for the rich, and even more terrifying, the poor should be educated. It might not have caused a revolution in Britain, but it was certainly responsible for more than a few riots.

Paine’s ideas spread like smallpox. The London Corresponding Society, a group made up of craftsmen and workers, began politely demanding for universal male suffrage. Such radical insubordination was unacceptable to the government, so from 1794 all political leaders of any political group could be arrested without trial and then they tinkered with the treason laws to effectively prevent public demonstrations. Despite this, support for reform grew.

By 1811, a group calling themselves the Luddites began smashing the machines that kept them in poverty in the hope that they would be paid properly for their skills. True to form, the government responded with more repression. In February 1812 they passed the Frame Breaking Act, which resulted in the death penalty for anyone sabotaging the machinery. This harsh punishment might have stopped the destruction, but it bred resentment. More and more political reform groups began to form in secret and spread seditious ideas. Their effort became more organised, and as far as the government was concerned, worryingly so.

The wars with France had made the economic situation in Britain difficult. By 1815, there was a great disparity between wages and the price of food. Starvation has a way of motivating people, so civil unrest became commonplace. The Spenceans, a radical group that grew out of the London Corresponding Society, organised a mass meeting at Spa Fields in London in 1816 to protest about that hardship that many were suffering from and to campaign for male suffrage. Their great orator Henry Hunt, might have suggested, in a roundabout fashion, that if the government refused to listen to reason, then other methods of persuasion might need to be adopted.

The large gathering soon descended into violence. When the mob began to march towards the Tower of London, they were met by government troops who used unnecessary force to stop them. A similar meeting led by Hunt, in St Peters field in Manchester, in 1819 became infamous. When approximately 70,000 people came to protest about their lack of representation in the government, those in power panicked and sent in the cavalry to charge at the unarmed crowd. In the resulting carnage, the over-zealous troops killed at least 11 people and injured another 600 men and women. The event was later nicknamed the Peterloo Massacre by the poor, because like Napoleon’s men at Waterloo they had been shown no mercy from the British army.

The following year, the government claimed to have irrefutable proof that the Spenceans were now trying to over-throw the government and kill Lord Liverpool and his cabinet. Police spies infiltrated the poorly-organised group and what became known as the Cato Street Conspiracy was stopped before it had even started. That did not stop the government rounding up the radicals and metering severe punishment. Five were publicly hanged and the remainder were transported to Australia in a blaze of publicity.

While the government continued to treat any attempts at protest as a sign that revolution was imminent, the working classes became more organised. The roots of trade unionism were forming and the masses became more politicised. Cheaply printed political pamphlets and clandestine taproom meetings made radical ideas more accessible. In parliament, the Whigs argued that some reform was now necessary to protect all that England held dear.

MPs and Lords were not convinced and refused to heed the warnings. Things became so grave by 1830, that even the Duke of Wellington himself lost the support of the government. He was ousted as Prime Minster when he refused to entertain the idea of reform, claiming that the majority of the people were happy to leave things exactly as they were. A general election had to be called when the Whigs proposed a drastic set of reforms and politicians traded insults across the floor of the house to such an extent that many parliamentary proceedings descended into chaos. Now, not only were the lower classes revolting, it seemed parliament was, too. For many, it appeared that the country now hovered on the very brink of inevitable revolution, and perhaps, at that moment, it was.

Finally, in 1832, the Whigs were able to push The Grand Reform Bill through both houses. The Rotten Boroughs were removed and the country was divided up into constituencies that were created in line with the size of the populations, and each constituency could only send one MP to parliament.

Better still, the vote was granted to any man over the age of twenty-one who was in possession of land worth ten pounds or more. This increased the number of people who could vote from 435,000 to 652,000, although this figure was still a drop in the ocean compared to the overall British population of twelve million and rising. But it was just enough to stop the revolution in the short term.

Nowadays, the changes they made might seem insignificant, but they opened the door to change. Once that door was open it proved impossible for parliament to close it again. The working class voice was getting louder, and as the 19th century progressed, they showed no signs of shutting up. They wanted all that Thomas Paine had promised, and by the end of the century, they would have it.

Virginia Heath writes witty, raunchy Regency romances for Harlequin Mills & Boon. That Despicable Rogue is available now and her second novel, Her Enemy at the Altar, comes out in July 2016.