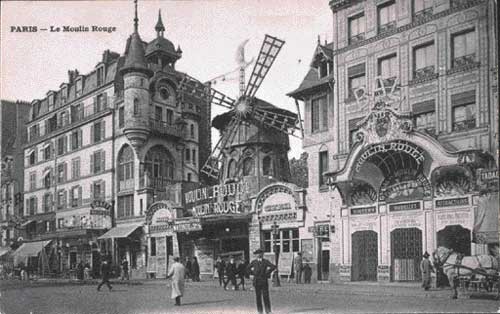 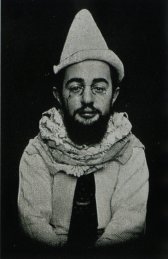 Toulouse-Lautrec, dressed as a clown

Henri Marie Raymond de Toulouse-Lautrec-Monfa was born on November 24th, 1864 at the Hȏtel du Bosc at Albi to Count Alphonse de Toulouse-Lautrec-Monfa and Countess Adèle Tapié de Céleyran. The counts of Toulouse could trace their lineage back to Charlemagne, and by the late nineteenth century, they lived in genteel comfort in estates across the south of France. They had maintained their fortune largely through the intermarriage within the family, and Toulouse-Lautrec’s parents were first cousins.

He suffered from pycnodysostosis, a hereditary disease that rendered his bone structure sensitive and weak. After he broke both of his legs as a child, they stopped growing altogether, leaving him permanently stunted at 5’1”. It was during his convalescence that he first began to develop his skill as an artist. Even after he could walk again, his condition kept him from many of the leisure pursuits enjoyed by his family, particularly hunting and riding, so he spent his time drawing and painting. When he decided to pursue a career as a painter, his family was supportive.

Toulouse-Lautrec moved to Montmartre in 1884 at the age of nineteen. As he wrote to his family:

“Of course Papa would think me an outsider… It has cost me an effort, and you know as well as I do that leading a Bohemian life goes against the grain and taxes my will sorely in the attempt to get used to it, since I still bear with me a load of sentimental considerations that I shall have to throw overboard if I am to get anywhere…”

Throw them overboard he did. In his quest to develop his art and understand his subjects, he threw himself into the thriving bohemian culture of Montmartre. It was a hard-partying world of absinthe, revolutionary politics, brothels, and nightclubs open at all hours and filled with notable figures like Oscar Wilde and Renoir. Edgar Degas’ studio was in the same house as Toulouse-Lautrec’s first apartment, and they painted some of the same people. Vincent van Gogh was also an outsider in Paris and the two became friends.

Toulouse-Lautrec’s art is characterized by a love of life and empathy for his subjects. In confident strokes and bold colors, he captured movement and mood like no other, recording the vibrancy and ugliness of the Montmartre nightlife with unflinching honesty and near spiritual devotion. His sketches, paintings, and lithographs portray the intangible — innocence in immorality, truth in the theatrical — with playfulness and startling simplicity.

Toulouse-Lautrec had the advantage of being born wealthy. He was not dependent upon his art to survive, so everything he did, he did for love — love of life, love of his art, and love of his subjects. While many others were obliged to take commissions, Toulouse-Lautrec haunted bars, brothels, and dance halls in his relentless pursuit of life itself. He was fascinated by physical prowess due in no small part to his own limitations, and as such, he painted dancers, acrobats, and even jockeys.

He was particularly fond of prostitutes, and the feeling was mutual. They adored him and allowed him to stay with them. He felt most at home in brothels, and even lived in one for some time. Prostitutes were his favorite models. He explains: “Professional models always seem to have been stuffed, whereas these girls are alive… They loll and stretch on the divans like animals… They are utterly without affectation.” His Elles album captured the details of their daily lives — washing, dressing, waiting, talking — with affection and empathy, bringing out the nuanced beauty in the mundane.

His love of life unfortunately contributed to his tragically early death at the age of thirty-five from complications related to alcoholism and syphilis. Although his life was short, his contribution to modern art cannot be overemphasized. While he may not have the name recognition of van Gogh, his work was no less influential. His at times unnerving realism and choice of subjects has influenced generations of artists, and his posters made a mark on pop art and advertising that can still be felt today.

Toulouse-Lautrec saw himself as an observer, and most of his subjects were real people. Although many of them were notable at the time, they achieved a degree of immortality through his work. Let’s take a look at some of the figures of Toulouse-Lautrec’s Montmartre:

La Goulue: Dancer Louise Weber was known by her stage name La Goulue (“the glutton”) for her habit of finishing off customers’ drinks as she danced past their tables. The “Queen of Montmartre” embroidered hearts on her knickers and kicked men’s hats off with her toes. 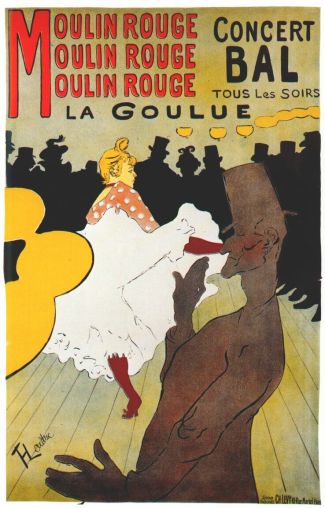 Valentin-le-Désosseé (Valentin the Snakeman, or Valentin the Boneless) was the stage name of wine merchant Jacques Renaudin. He is the distinctive-looking man in the foreground of this lithograph, and he danced at the Moulin Rouge in his spare time.

Aristide Bruant was a popular singer fond of abusing the audience at Le Mirliton, his cabaret club in Montmartre. Standing on top of the tables, he would sing songs about life in the working-class suburbs wearing dramatic costumes of his own design and punctuating his works with a cane he didn’t need. Toulouse-Lautrec was a big fan, and was known to sing his songs in his studio. You can find many of his recordings on YouTube today.

Yvette Guilbert was also a singer of chanson réaliste, a predecessor of Edith Piaf, and she sometimes sang Bruant’s songs. She was a tall, slender woman and her trademark long black gloves appear in the background of some of Toulouse-Lautrec’s paintings. She despaired of the way he portrayed her, but saw value in its honesty whereas other artists had been kinder. She was actually rather lovely. Many of her recordings still exist, and you can listen to them here.

Jane Avril was a famous cancan dancer and a friend of Toulouse-Lautrec. While he made many promotional images of her, this painting shows a more intimate side to her, lost in thought as she is walking home through Montmartre.

Cha-U-Kao: Cha-U-Kao was a female clown at the Moulin Rouge and an open lesbian. Toulouse-Lautrec opened his Elles series with her image. Many of the prostitutes he met were involved in lesbian relationships, and he found this to be quite moving: “When you see the way they love…(it is) the technique of tenderness.”