Anne Bonny was born in Cork around 1690 to lawyer William McCormac and his servant, Mary Brennan. The scandal of Anne’s birth caused her father to lose much of his practice as well as his wife, so he took Mary and Anne to Charleston, South Carolina, and set up a new practice there. William – now going by Cormac – was so successful in his new home that he was able to buy a large plantation and Anne grew up in some degree of comfort.

Even by thirteen she was said to be stunningly beautiful, and had more than her fair share of suitors. Lovely as she was, she would soon be known more for her “fierce and courageous temper.” When one suitor attempted to rape her as a teenager, Anne beat him so badly he was bedridden for weeks.

Anne was passionate, capable, and she craved adventure. She wanted to escape life in Charleston, and she married a penniless sailor to do it. At sixteen, Anne married a James Bonny and left for the pirate haven of Nassau, New Providence. 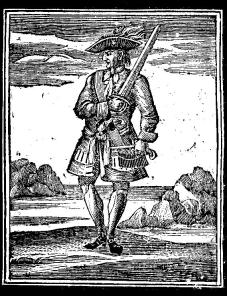 Fascinated by piracy, Anne loved life in Nassau and was known to hang around the dives, drinking with the likes of Captains Vane, Hornigold, and even Blackbeard. Surrounded by infamous men with enough swagger to match her own, she quickly got bored with her husband. She washed her hands of him when he became an informant for Governor Rogers, and passed her time with many of the local pirates instead.

One of these pirates was Calico Jack Rackham, so called for his love of flamboyant clothing. Jack was a pirate captain who had come to Nassau in hopes of gaining a privateering commission from the king. He was charming, handsome, and absolutely fascinating to Anne, who was rather romantic at heart.

As for Jack, he fell hard. He accepted her promiscuous past, and swore she would belong to no one else but him going forward, which she seems to have been fine with. He offered to buy Anne from her husband (a relatively common practice at the time, and a form of divorce), but her husband refused. Governor Rogers got involved when her husband made a fuss, and he ordered her to return to her husband or he would have her whipped as an adulteress.

Not only did Anne refuse, but she became a pirate.

Anne and Jack took off and began sailing together on his ship, Revenge. Armed with a sword and pistol and dressed as a man, she swore like a pirate and fought like hell. Drop dead gorgeous with long, red hair, Anne may not have passed for a boy, but none of the other sailors gave her any trouble. This may have been because it was common knowledge that she was in a relationship with Jack, or it might have been because she was absolutely terrifying. In Captain Johnson’s General History* he writes that “no body was more forward or courageous than she,” and those who knew her seemed to agree.

In early 1720, Anne and Jack had a child in Cuba. The fate of the child is not known, but if he survived, it is thought he was left with their friends there. Regardless, she was back on the boat and fighting within months.

According to Captain Johnson, Anne’s relationship with Jack was complicated when they took on a young sailor from a Dutch ship. In spite of her love for Jack, she rather fancied the sailor and made it known to him that she was a woman in case he was not already aware. The sailor had a secret of his own – he wasn’t Dutch, and he wasn’t a man, either. Anne’s sailor was actually the twenty-seven year old Englishwoman Mary Read.

Mary had been raised as a boy and had even had a career in the army, serving as a cavalry soldier in Flanders during the War of Spanish Succession. After her own marriage had ended with the sudden death of her husband, Mary decided to make a go of it as a sailor. Anne and Mary became fast friends, presumably out of a mutual love for trousers and swashbuckling.**

It’s a good story, but historian Colin Woodard disputes Captain Johnson’s account as there are records that Governor Rogers knew both women by name and that Mary set out with Anne and Jack from the start. Like many good stories, Mary’s account of her life was probably embellished if not totally fabricated. Regardless of how they met, Anne and Mary were very close friends and important members of Jack’s crew. According to Dorothy Thomas, an eye witness quoted in the pamphlet The Tryals of Jack Rackham and other Pirates (1721):

“(They) wore men’s jackets and long trousers and (had) handkerchiefs wrapped around their heads…a machete and pistol in their hands and cursed and swore at the men.” 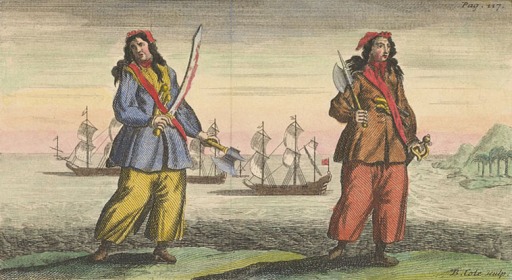 The only way Ms. Thomas knew they were women was “by the largeness of their breasts.”

The Golden Age of Piracy was coming to an end by 1720, and Anne and Jack were caught in the middle of it. In an effort to curb piracy in the area, the governor of Jamaica chased them down and caught Jack and his crew in Dry Harbor Bay. The crew was woefully unprepared and almost certainly drunk. Although Anne and Mary fought bravely, they were all taken and imprisoned in Jamaica.

At their trial, Anne and Mary were identified only as “spinsters,” which was laughably inadequate and technically incorrect. They were sentenced to execution for piracy, but their sentences were delayed as both women had managed to become pregnant while in prison. Mary died of a fever during this pregnancy, and her lover, Tom, was acquitted.

Jack was hanged in Port Royal on November 18th, 1720. Still very much in love with Anne, he asked to see her before his execution. According to Johnson, Anne, still angry that they had been captured, said that she was sorry to see him there, but “If he had fought like a man, he need not have been hanged like a dog.”

There is no record of Anne’s execution. It is suspected that her father had pulled some strings to have her released, and she was never heard of again. It has been suggested that Anne later married and lived into her eighties, but this has not been conclusively proven.

Sources
Johnson, Captain Charles. A General History of the Robberies and Murders of the Most Notorious Pyrates (1724) (Note: All images are from this book unless otherwise noted)
Sherry, Frank. Raiders & Rebels: A History of the Golden Age of Piracy.
Woodard, Colin. The Republic of Pirates.

Notes
*Captain Charles Johnson is a pseudonym. This is thought to have been written by Daniel Defoe.
**Squad goals.

5 thoughts on “Must Love Machetes: The Legend of Pirate Anne Bonny”