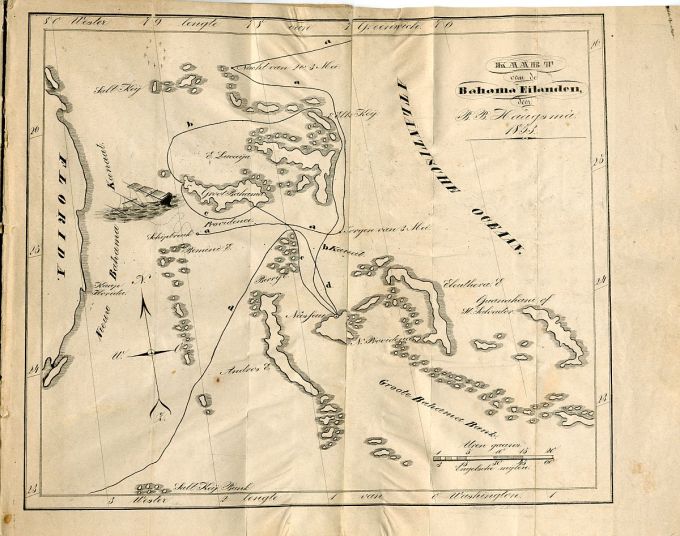 When 208 passengers boarded the William & Mary in March 1853, they had no idea of the drama that would ensue after the ship set sail from Liverpool for New Orleans, or that violence and murder were in their future. Captained by the relatively inexperienced Timothy Stinson, it soon became clear to the emigrants that they were in a very vulnerable position, not least because the crew refused to give them enough food. Fourteen died as they crossed the Atlantic, a relatively high mortality rate, due in part to Captain Stinson’s failure to engage a ship surgeon for the voyage. Instead, when people were confined to their berths with fever, he consulted a pamphlet he carried in his breast pocket and prescribed them bacon, which did precious little to help those suffering with measles and typhus below deck.

Many captains skimped on surgeons and provisions, and got away with it, but it was when the ship reached the Bahamas that Stinson’s true character – or lack of it – was revealed. He chose to sail through the treacherous shallows of the New Bahama Channel, an area notorious for its hazards and shipwrecks, and the William & Mary was soon impaled on a rock. The ship was washed onto another rock nearby then an enormous wave freed her, allowing the water to pour in through the hole in the hull. They were sinking. 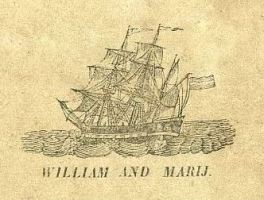 Stinson strode about the crowded deck in his slippers, threatening the emigrants with his own desertion, and lying about the depth of water in the hold, doubling it and panicking the passengers. The exhausted emigrants pumped through the night while the crew devised a plan of escape and quietly removed provisions (and themselves) to the least leaky lifeboat. The distress flag was taken down from the mast and hidden, ensuring that any passing sailors would assume all was in hand, and while the passengers were distracted, Stinson changed his slippers for boots and abandoned ship. Some of the unlucky emigrants attempted to follow, swimming for the lifeboat, only to be hacked at with hatchets and murdered before their families’ eyes. The captain stood, raised his hat, and called “Friends, may you fare well” as his crew rowed him to safety.

Stinson’s lifeboat was soon picked up by a ship on its way to New York. He reported the William & Mary as lost before his eyes, then disappeared when journalists pressed for details. The New York Times of 18 May 1853 smelled a rat:

“…the cause [of this wreck] is traceable to culpable negligence and carelessness. Had the officers in charge kept a bright watch for dangers, there is nothing to indicate that the reef might not have been avoided; had the Captain taken more effective measures for the preservation of his passengers and his papers, the loss would have been less serious. And, finally, the silence and speedy exodus of Captain STINSON argues that there is little to be offered in extenuation. That a sea-captain should coldly report that his vessel had ‘gone down’ and ‘it is supposed that all on board perished,’ is altogether too systematic and provokes disagreeable emotions. It was at least due to the public that a statement duly authenticated by the survivors, should have been prepared and published by the Master, before he found it convenient to leave New-York for his home in Bowdoinham. If there is a reason for this silence, or an explanation for this seeming carelessness, the public will be glad to hear it.”

Newspapers gave brutal assessments of his character, and the Irish newspaper the Freeman’s Journal of 31 May 1853 referred to the incident as “convincing proof of the cowardice or insensibility of Captain Stinson”.

Why, in a time of chivalry and strict salvage laws, would this captain and crew have done such a thing? It is impossible to tell for sure after over 160 years have passed, but it appears as if Captain Stinson, whose father-in-law was part-owner of the ship, was attempting to bury all evidence of his mistakes – and save the owners money while he was at it. If the passengers died, little or no compensation would have to be paid out, and by leaving the people in his charge on a sinking ship with no provisions Stinson could be reasonably sure that only his version of events would survive.

He must have been shocked to the core to find his attempt at mass murder had failed.

“No news item of the month has been so worthy of rejoicing over, as the intelligence of the rescue and safety of the emigrant passengers of the ship William and Mary, wrecked amongst the Bahamas on its way from Liverpool to New Orleans. About one hundred and seventy human beings, given up to the waves and monsters of the deep, rescued by wreckers, it seems, while their sinking coffin was tumbling about among rocks and breakers and just ready to make the fatal plunge, are thus happily saved.” (Spirit of the Times, 7 June 1853)

Thanks to the courage of a crew of wreckers who saw the sinking ship two days after the hull was holed, and the perseverance and sheer will to survive of those on board the William & Mary, the majority of the emigrants were saved. The cowardice of Captain Stinson did not kill them, and the story of what happened on this ordinary emigrant ship full of extraordinary people is lost no longer.

Gill Hoffs is the author of Wild: A Collection (Pure Slush, 2012) and two shipwreck books, The Sinking of RMS Tayleur: The Lost Story of the ‘Victorian Titanic’ (Pen & Sword, 2014, 2015) and the recently released The Lost Story of the William & Mary: The Cowardice of Captain Stinson (Pen & Sword, 2016). She lives in Warrington, England, with Coraline Cat. If anyone has any information regarding these shipwrecks and the people involved, they can email her at gillhoffs@hotmail.co.uk or find her on twitter @GillHoffs.

2 thoughts on “Attempted Mass Murder at Sea: The Cowardice of Captain Stinson”