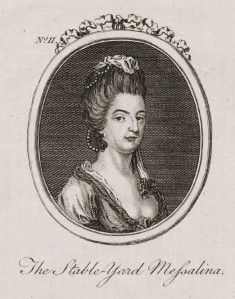 I must admit I thoroughly enjoyed doing the research for my book In Bed With the Georgians and one of the things I found really fascinating concerned what was known as The New Female Coterie. It was a sort of ‘club for fallen women’ and was headed by Caroline, Countess of Harrington.

Rumour has it that she was black-balled for membership of the altogether more salubrious and uber chic Female Coterie – a group of ‘ladies of quality’ which met at London’s Almack’s Assembly Rooms. They would link up at Almack’s for a spot of supper, a good natter, and a round or two of loo (a popular card game).

But there was no way that these good ladies wanted to have anything to do with Caroline, Countess of Harrington, who had altogether too racy a reputation. So Her Ladyship went off in a huff and founded her own club. It wasn’t an association with formal rules or membership – more an informal gathering of people who had in common the fact that they were expelled from ‘polite society’. In other words, they were linked by the fact that they had been caught out committing adultery.

So where did they meet? Appropriately, in a top class brothel! It was run by Sarah, a well-known member of the Prendergast family. Her premises at King’s Place were able to attract some of the best known and wealthiest men in the country.

Caroline was originally known as Lady Caroline Fitzroy and was born on 8 April 1722 as the daughter of Charles Fitzroy, 2nd Duke of Grafton and Lady Henrietta Somerset. She married William Stanhope, 2nd Earl of Harrington, in 1746 and died on 26 June 1784 at the age of sixty-two. Her somewhat colourful lifestyle makes it important to distinguish her from the ‘other’ Countess of Harrington, namely Jane, Countess of Harrington. 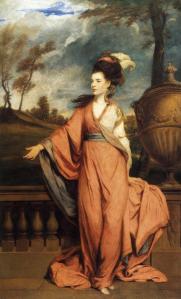 Jane married Caroline’s son, who went on to become the 3rd Earl. As such Jane led a blameless life, and was, with Georgiana, Duchess of Devonshire, one of the beauties of the Age. Ironically Jane’s younger sister, the scandalous Seymour Dorothy Fleming, was to join Jane’s mother-in-law Caroline as a member of the New Female Coterie. Seymour also figures in my book in her own right – she was the notorious “woman with twenty-seven lovers” who figured in the infamous Crim. Con. case between Sir Richard Worsley and George Bisset.

But back to Lady Caroline: she was regarded as a great beauty and was renowned for her love of a bit of bling. At the coronation of George III, Lady Harrington appeared “covered with all the diamonds she could borrow, hire, or seize,” and was “the finest figure at a distance.” She was the subject of much comment by that notorious old gossip Horace Walpole, and she revelled in the notoriety.

Lady Caroline Harrington may have had seven children by her husband, but she apparently had an insatiable appetite for sex. She was an enthusiastic bisexual whose conduct scandalised Society.
Her husband, who acquired the nickname ‘the goat of quality’ was too busy bedding other women to bother about what his wife was getting up to. However, the couple maintained some shred of respectability because the profligate Lord Harrington wasn’t hypocritical enough to divorce her for following his example.

The Press nicknamed her the “Stable Yard Messalina” — Messalina being the debauched wife of the Emperor Claudius. The “stable yard’ was a reference to the name of their home near St James’ Park, and her title of the “Stable Yard Messalina” was intended to convey her ardour, stamina, and enthusiasm in the bedroom. She was portrayed as a nymphomaniac “of highly refined salaciousness” who had enjoyed illicit sex with dozens of men, including her footman. An article in the Town & Country Magazine said that there were many reports of her amours “with lovers from a monarch down to a hairdresser and every member of the diplomatic body” as well as a Northern potentate and several of her own servants.

She had a weakness for both sexes and when her lesbian lover Elizabeth Ashe deserted her for a diplomat she “was quite devastated…her character was demolished by the desertion.” Denied social acceptance elsewhere, she formed the New Female Coterie where members would meet up once a month to catch up with other women ostracised by society. Here the great-but-no-longer-good would meet to have a good natter, and get drunk on champagne and nostalgia. It had the advantage that if any of the ladies felt so inclined, they could take their pick of lovers from the gentlemen visitors. For Sarah Prendergast, it must have been good for business being able to call on the services of such ladies, and for the women it gave them an opportunity to make a few guineas while finding an outlet for their sexual desires. 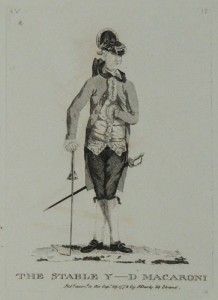 “The Goat of Quality:” The Second Earl of Harrington, also known as “The Stable Yard Macaroni.”

Caroline’s husband the 2nd Earl Harrington was also known as “Lord Fumble”, and was described as being as “lecherous as a monkey.” He frequented the same Prendergast brothel as his wife, and turned up regularly as clockwork, four times a week. Once, he grew bored with the resident whores on offer and so he asked Mrs Prendergast to send out for more, from a nearby emporium run by a Madam known as Mother Butler. He was loaned the use of two girls known as Country Bet and Black Susan, and passed a few hours in their company. He then paid them each a miserly three guineas, much less than the going rate.

When the girls returned to Mrs Butler she demanded her cut of twenty-five percent and was furious to discover the underpayment. She apparently didn’t believe the girls, and seized their fine clothes as a punishment. The girls retaliated by accusing her of stealing the clothes and suddenly the whole thing snow-balled: the magistrates investigated the claim of theft, and statements were read out in Court that the Earl of Harrington always attended Mrs Prendergast’s every Sunday, Monday, Wednesday and Friday, and that it was his custom to ask for two girls on each occasion.

All this was reported in the Morning Post and the Morning Herald. The Earl was furious and demanded that Mrs Prendergast buy up all copies of the papers. She was terrified at the thought of losing a valuable customer, so she employed all six of her girls to do just that. They couldn’t buy the ones already in circulation in the various clubs, coffee shops and taverns which stocked them, so these were simply stolen. She also paid five guineas to Country Bet and Black Susan to drop the case, and wrote letters to all her clients assuring them that their anonymity was safe and that nothing like this would ever happen again.

It was all a bit like some of the leaks on the internet we read about, where members names and passwords are hacked from dating sites!

Mike’s book In Bed with the Georgians: Sex, Scandal & Satire in the 18th Century comes out with Pen & Sword at the end of November. It is available at a discounted price of just under £12, direct from the publisher here. Mike also does a regular blog on all-things-Georgian at http://mikerendell.com/blog/

One thought on “Caroline, Countess of Harrington and The New Female Coterie”