New episode! This week we’re talking about laudanum, an incredibly common (and incredibly dangerous) Victorian cure all made from opium and alcohol. Today’s photos include:
Piano, 1888. Definitely not cursed…probably. Wait—is that the “Croatoan” font?
This week’s episode is up! Since today is Bastille Day, we’re talking about the storming of the Bastille on July 14th of 1789, which started the French Revolution. Here are today’s pictures:
Journalist Camille Desmoulins. Desmoulins played a big part in the storming of the Bastille on July 14th of 1789, as we talk about on today’s episode. This didn’t make it in, but here’s my favorite quote of his: “I wonder why I ever bothered with sex. There’s nothing in this breathing world so gratifying as an artfully placed semicolon.” I know, right?
New episode! In the 19th century, no one ever married outside their class…right? In this episode, we look at some people who did. Elizabeth Armistead was a courtesan to the aristocracy who married the love of her life, politician and abolitionist Charles James Fox. Arthur Munby was a gentleman who secretly married Hannah Cullwick, a maid with a *very* interesting fetish.
Before Coca-Cola, there was coca wine, which was exactly what it sounds like: wine fortified with cocaine. Totally safe for kids, it says. Worth reading the fine print. We’ve talked about the history of cocaine in pharmaceuticals and 19th century drinks on the blog—check it out at dirtysexyhistory.com 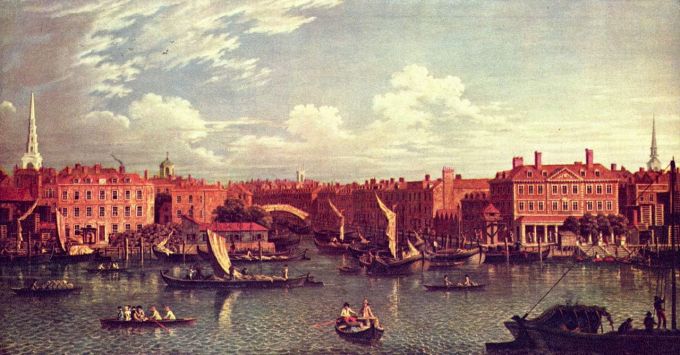 London’s major river is, of course, the Thames but, as the capital’s antiquarians will tell you, there are more than a dozen ancient tributaries hidden beneath the surface of the modern metropolis. The largest of these smaller rivers is the River Fleet, which flows from the largest stretch of common green in London, at Hampstead Heath, to Blackfriars Bridge, where it enters the Thames. This is a journey, not just from North London to the River, but also through the history of the City from Ancient to Modern times, marking some colourful characters and encompassing some bewildering changes along the way.

Cities are typically built along rivers to provide drinking water, transport, defense, and sewage removal. The Fleet has served all of these functions over London’s long history. As place-names along its banks (Brideswell, Clerkenwell) suggest, many wells were built along the Fleet in Roman and Saxon times, although, as we shall see, the purity of its waters were not set to be a defining feature as London grew.

The Fleet (‘tidal inlet’ in Anglo-Saxon) initially provided a waterway which served London from the North and, in a later incarnation as the New Canal, was part of the network which brought coal from the North of England to fuel the rapidly industrializing London of the seventeenth and eighteenth centuries. Even after the canals were superseded by road and rail and entirely covered over in the later eighteenth and early nineteenth centuries, the valley carved by the Fleet continued to form the basis for some of London’s modern arteries, such as Farringdon Road and the Metropolitan Railway line (although it resisted having an underground railway line–that which would become the Jubilee Line–lain beneath it by repeatedly flooding tunnels).

Defensively, the Fleet has a rather inglorious history. It is unclear how the Fleet was utilized by the Romans and it seems rarely to have been called upon subsequently. A second century boat carrying ragstone (possibly intended for building the city wall) was discovered in 1962, sunk at the mouth of the river.

Much later, the Fleet’s banks were built up into earthworks during the Civil War, when London was very much a Parliamentarian (‘Roundhead’) stronghold. The Royalist armies, however, never threatened the capital, with Charles II’s return to the City being by invitation rather than by conquest. During one of the great crises of the restored king’s reign in 1666, desperate Londoners were hopeful that the Fleet would provide an effective break against the Great Fire as it reached its third day. Here the Fleet proved as ineffective as the civic defenses and the Fire jumped the Fleet ditch, ultimately allowing it to claim St Paul’s Cathedral.

Of course, the most serious modern military threat to London came from the air in the form of the Luftwaffe. The old river beneath Fleet Street could offer no protection when Serjeant’s Inn, one of the oldest legal precincts in England, was destroyed during the Blitz.

It is with the removal of sewage and other waste, or at least with its failure to do so effectively, with which the Fleet is most famously associated. As London grew, the Fleet increasingly became a repository for whatever the city’s inhabitants wanted to get rid of. The medieval meat markets which grew up to feed the expanding population soon became problematic and in 1290 the Carmelite monks complained that the offal deposited in the river by butchers at a nearby market (the delightfully-named Shambles, at Newgate) was constantly blocking what was, at this point, a stream.

Although all manner of industries poured waste into the Fleet, it was the offal and dead animals in various forms which seemed to catch the imagination of early modern satirists of the capital. Ben Jonson’s (c. 1612) mock-epic poem which lends its title to this article was a litany of classical references intertwined with toilet humour and social satire and described the diverse pollutants of the river with considerable gusto:

Your Fleet Lane Furies; and hot cooks do dwell,
That, with still-scalding steams, make the place hell.
The sinks ran grease, and hair of measled hogs,
The heads, houghs, entrails, and the hides of dogs:
For, to say truth, what scullion is so nasty,
To put the skins, and offal in a pasty?
Cats there lay divers had been flayed and roasted,
And, after mouldy grown, again were toasted,
Then, selling not, a dish was ta’en to mince them,
But still, it seemed, the rankness did convince them.
For, here they were thrown in with the melted pewter,
Yet drowned they not. They had five lives in future.

Jonson’s influence and the continued assault of the Fleet upon the senses continued into the eighteenth century: Jonathan Swift’s “Drown’d Puppies” and “Dead Cats” of 1710’s A Description of a City Shower, floating amongst the offal and turnip-tops, were echoed by Alexander Pope’s “large tribute of dead dogs to the Thames” in 1728’s Dunciad.

The enthusiasm of these men for describing the sewage, of which the Fleet’s waters seemed largely comprised, was hardly less. Jonson’s ‘voyage’ was taken down a river where “Arses were heard to croak, instead of frogs”. His Fleet contained the contents of every ‘night-tub’ from an overcrowded metropolis, where “each privy’s seat/ Is filled with buttock” and the very “walls do sweat Urine”. This state of affairs is compounded by the diet of a city where “every clerk eats artichokes, and peason, Laxative lettuce, and such windy meat”. In 1700, Thomas Brown has his narrator, an ‘Indian’ revealing the strange “Manners, Customs, and Religions” practiced by the various “Nations” of London to his readers, shove an impudent rag-seller into the kennel [1] in the centre of the street with the words:

Tho’ I want nothing out of your Shops, methinks you all want good Manners and Civility, that are ready to tear a New Sute (suit) from my Back, under pretence of selling me an Olde one; Avant Vermin, your Cloaths smell as rankly of Newgate and Tyburn, as the bedding to be sold at the Ditch-side near Fleet-Bridge, smells of Bawdy-House and Brandy.

Brown’s tone is lighthearted and playful, but some of the associations he makes are telling. The visceral nature of these accounts certainly reflected a literal reality but they also had a metaphorical dimension in which it was the excesses and vices of London itself which were clogging up its abused waterways. The writers were playing, not just on the Fleet’s role in waste disposal, but also on the reputation of those who occupied its banks. In Jonathan Swift’s A Description of a City Shower, in particular, a storm washing through London links the different areas and strata of the city together through its flow.

The Fleet flowed past Bridewell and the Fleet prisons and through areas such as Clerkenwell, notorious for sheltering heretics, thieves, and prostitutes from the arms of the law. Here the bodies floating downstream alongside the unfortunate cats and dogs might be human. The industries around the river were messy and disease was known to cling to its slums. The Dunciad plays on the Fleet’s use as an open sewer by having the hack-writers, who are one of the principal subjects of Pope’s ire, swim in it. The implication was as clear as Pope’s Fleet was ‘muddy’. Much later, Charles Dickens’ child-warping pick-pocket, Fagin, would have his den alongside the Fleet.

From the early attempts by the Carmelites to keep the river unblocked to the late seventeenth and early eighteenth century attempt to make it serve as a canal, the smell and the constant need for dredging could not be overcome. So impossible was it to contain the flood of effluent that, even after the river was paved over during the later part of the eighteenth and early part of the nineteenth centuries, the build-up of trapped gas exploded near Blackfriars in 1846, taking out three posthouses and a steamboat in the process. It must have seemed as though the truth would not be hidden beneath the streets. Eventually, however, the Great Stink of 1858 preceded a concerted effort to enclose the city’s sewers and a London more familiar to us today emerged.

Dr. J.V.P. Jenkins is a historian and freelance editor from London. He earned his BA, Master’s, and Doctorate at Swansea University. He is the new co-editor of Dirty, Sexy History and sometimes tweets @JVPolsomJenkins.

[1] An open gutter, running down the middle of the street. The 1671 Sewage and Paving Act had prescribed moving the kennel from the center of the street to an open side drain set off by a raised pavement. The main thoroughfares were also to be cambered (built up in middle for drainage and paved) but these measures were not instantly applied to all streets.