It was probably the Egyptians who first believed it was a medical problem, but we have to blame the Ancient Greeks for all of the nonsense which came later. The term comes from hystera, the Greek word for uterus, and eminent Greek physicians who followed the teachings of Hippocrates had some funny ideas about this particular female organ.

Aretaeus of Cappodocia describes it thus:

“In the middle of the flanks of women lies the womb, a female viscous, closely resembling an animal; for it moves itself hither and thither in the flanks… it is altogether erratic. It delights, also, in fragrant smells, and advances towards them; and it had an aversion to fetid smells and flees from them; and, on the whole the womb is like an animal within an animal.”

Hysteria, or wandering womb, was caused when this fidgeting strange little animal was not sufficiently ‘irrigated with male seed.’ Left to wander too far, it could interfere with the delicate female brain. Hippocrates believed hysteria needed to be treated with smells, foul ones at the nose and perfumed ones around the nether regions, to coax the nomadic beastie back into the pelvis, and recommended regular coupling with a vigorous man. Male seed, after all, would prevent it wandering in the first place.

This ridiculous theory persisted through time. By medieval times they had mixed the flawed science with religion as they did with so many things. Hysteria was the Devil’s work and needed to be treated with prayer or penance. Persistent hysterics might even have to be executed for their lustful, unruly, wayward wombs.

By the 17th century as science began to usurp the power the church had over medicine, treating hysteria rather than punishing it became the norm. But with physicians estimating at least three quarters of the female population suffered sporadically from the malady, treating it became a daily part of every doctor’s life.

This practice was not only widely accepted by the prim and proper 19th century society, it was lauded for its health-giving benefits and the most skilled physicians were inundated with repeat business. Unfortunately, it was time consuming and hard work. Physicians from the time complained about the toll it was taking on their poor wrists and arms. Some women, they lamented, took almost an hour to achieve the necessary hysterical paroxysm, and with so many patients in dire need of their services, the poor fellows were physically exhausted. Some even complained of such persistent symptoms, which today would be called repetitive strain injury, they were unable to work. It went without saying that if a hysteria doctor was not in any shape to be working then he could not reap the bountiful financial benefits from the huge proportion of women suffering from wandering wombs! Something had to be done.

This led to a variety of labour-saving devices being created with the express
purpose of mechanically ‘alleviating’ hysteria while saving the doctors’ joints in the process. And they invented some corkers.

George Taylor’s steam powered manipulator involved a coal fired engine in one room connected to a peculiar table-like contraption in another. In the middle of the table was a convenient hole which the hysterical woman sat astride, while the steam made a metal ball vibrate in the cavity. As beneficial as many patients found it, the doctors complained about the amount of coal they had to shovel in the engine, so it’s time was scandalously cut short. There were several hand-wound devices but as they also required the physician’s energy to vibrate, the hunt was on for something easier.

Vigor & Co’s Horse-Action Saddle could be used in the privacy of one’s own home. As could the hilariously named ‘Chattanooga’. I could not for the life of me find a picture of that one, but learned it was almost five feet tall and so cumbersome they mounted it on wheels. 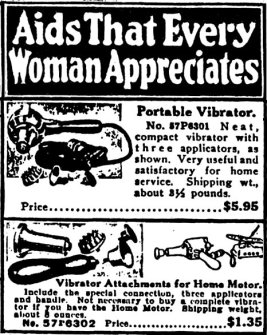 By the late 19th century and in the early part of the 20th century, a huge variety of vibrating personal massagers came on the market to treat women and they were even widely advertised in newspapers and periodicals, claiming all manner of health benefits and directly aimed at women. They didn’t hide from what it did either. One advertisement in the Sears catalogue of 1903 called a vibrating massager “a delightful companion… that will throb within you”!

Since then, even though the theory of hysteria has been debunked and forgotten, the world continues to feel the good vibrations of Granville’s invention. I just wish I could find a way to put all of this into one of my books!